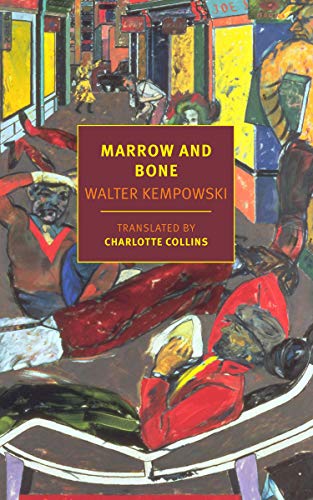 In the final weeks of World War II, when Walter Kempowski was 15 years old, he watched tens of thousands of his fellow Germans scramble westward through his hometown from their once-conquered territory in East Prussia, desperate to escape the victorious Soviet troops at their heels.

From that literal window on history, Kempowski, who died in 2007, produced a series of books with unusual viewpoints on the war and his country’s role—sometimes ironic, sometimes oblique, and sometimes painfully direct.

He is best known for the 10-volume Echolot (Echo Sounder), a collection of diaries, letters, oral histories, and other testimonials of the war years from ordinary and famous people alike. His novel All for Nothing is the story of a clueless family of minor nobility who passively observe the same East Prussian evacuation that Kempowski witnessed.

Marrow and Bone—first published in German in 1991 and now translated into English by Charlotte Collins—is dramatically different again.

This novel takes place long after World War II, in 1988. It centers on Jonathan Fabrizius, a lackadaisical journalist living in Hamburg with his much younger girlfriend, Ulla, an art history student. Ulla’s most important qualities seem to be her “pretty, round face still unmarked by the years,” a supposedly antique cameo ring, and her impressive full name (Ulla Bakkre de Vaera).

Unexpectedly, a Japanese auto manufacturer offers Jonathan 5000 marks to go on a PR test drive of its newest luxury model through a section of East Prussia that had previously been German and was now part of Poland. “He could . . . check out the local culture, see whether there was anything worth visiting in the region,” and write a 12-page puff piece to entice more journalists.

The 5000 marks are certainly tempting. Jonathan is also eager to visit the 14th century St. Mary’s Church in Danzig for an essay on Gothic architecture.

Nor is his relationship with Ulla an inducement to stay in Hamburg, even if the reader realizes how wobbly it is long before Jonathan admits it.

But the clincher for Jonathan is that he would be partly retracing the route of his origin story. As he constantly likes to tell people, “my mother breathed her last after giving birth to me in East Prussia in 1945,” on a covered cart, as she and her brother were fleeing the Soviets.

Jonathan begins his road trip with a mixture of contempt and guilt toward Poland, which was then still Communist, insisting on using the German place names such as Danzig rather than the Polish (Gdansk). He patronizingly describes his Polish hotel room: “There was even a bar of soap in the toilet and green shampoo that smelt of tar in a little plastic pillow. The hand towels had a slightly rancid odour, but at least the television had two channels on offer, which was enough, after all.”

As the trip goes on, the repercussions of the war inevitably intrude, but Jonathan does his best to evade the most painful ones. In his birth story, he and the other fleeing Germans are the victims. He acknowledges Germany’s guilt for Nazi crimes only casually: “When you’d started a world war, murdered Jews, and taken people’s bicycles away (in Holland) the cards were stacked against you.” Why, he wonders, had he agreed to go to a country that by rights ought to hate him?

Kempowski’s deadpan tone makes the callous reactions of Jonathan and his two German traveling companions even more chilling. Of course, the callousness also makes most of the characters fairly unlikable.

Yet it’s troubling that Kempowski doesn’t seem to notice his characters’ most disturbing example of indifference. When Jonathan, Ulla, and, later, her boss bat around ideas for her upcoming “exhibition about depictions of cruelty in the visual arts,” they consider ridiculous examples of supposed cruelty such as weather and “excessive pedantry” while ignoring the most heinous instance, in their own backyard: the Nazi concentration camps.

“Who’s to blame?” Jonathan asks himself as he thinks about “the suffering of all creatures.”

That’s a cop-out, and Kempowski’s piercing, between-the-lines laser won’t let Jonathan get away with it.