Married at Fourteen: A True Story 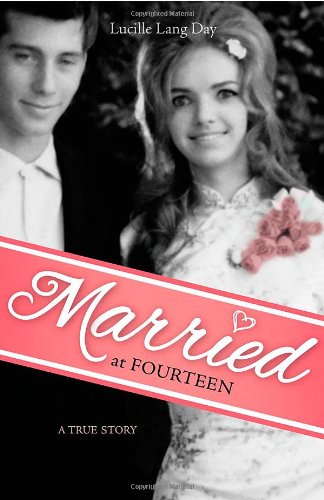 “Though Ms. Day is an honest guide who looks unflinchingly at her follies and failures, the ride is bumpy to the point of distraction.“

In her life, Lucille Lang Day has embraced both the arts and sciences. She has written literary nonfiction, a children’s book, and eight poetry collections. In addition to her M.A. in English and one in creative writing, she holds an M.A. in zoology and a Ph.D. in science and mathematics education. She even served for 17 years as the director of an interactive children’s museum in Berkeley, California.

These varied and impressive achievements are surprising, because, as we learn in her memoir, Married at Fourteen: A True Story, Ms. Day had little interest in school as a youngster; rather, she was driven by hatred of her mother—she was precocious in her rebelliousness—and her obsessive belief that life begins only upon finding love, snaring a husband, and starting a family.

Ms. Day strove for the traditional 1950s version of happiness with a 1960s radicalism.

A memoir profits from an adult perspective brought the experiences of one’s youth, and Ms. Day attempts to fulfill that promise in the second half of the work.

The first part of the book presents chronologically the several infatuations of her young life and the resulting dissatisfaction. This section suffers from charting merely her immature perspective. The young Ms. Day was a risk-taker, and the narrative effectively conveys the self-destructive impulsiveness of youth, but there is little reflection here.

Ms. Day does not attempt to layer her narrative in this first part of Married at Fourteen. As a result, monotony prevails.

In the second section, Ms. Day broadens her scope. She examines familial generations—from grandparents to grandchildren and back again—which allows for a fuller picture of her life, including developing empathy for her mother gained through her own experience raising her daughters and the revelation of her uncle’s grief at never having had a child and his resulting hostility toward Ms. Day as a mother.

The work thus gains the much-needed richness of a full life observed fully, and Ms. Day’s ambitiousness rewards the curious reader willing to take a voyage without a clear itinerary.

Yet ultimately the memoir fails due to this lack of cohesiveness between its parts.

The passages of youth are disjointed and in need of a stronger editorial hand. This problem is exacerbated in the more complex material of extended family, which becomes incoherent—at times making it impossible for the reader to track the course of a family member’s life or understand the connection between passages.

Though Ms. Day is an honest guide who looks unflinchingly at her follies and failures, the ride is bumpy to the point of distraction.

At the end of Married at Fourteen: A True Story, Ms. Day winningly inserts poems merging science and art, a fitting conclusion to the story of her life dedicated to these disciplines. The poetic touches evoke the poignancy of life, as one sees for example in the work of Annie Dillard and Diane Ackerman.

Ms. Day describes a beige universe in which “the poet breathes sound onto a silent page.” These final gritty and airy notes delight in a way the hulk and bulk of the storytelling does not.