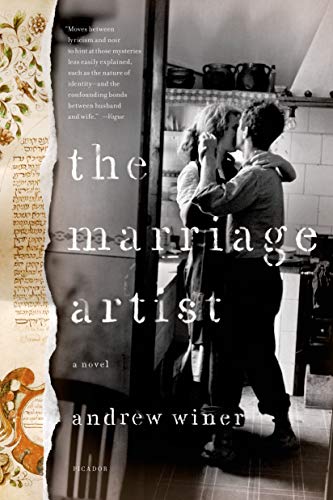 “The Marriage Artist is one of those rare novels that meet all the criteria for greatness: It entertains, informs, enlightens and finally and most importantly, it inspires. The magnificent writing is incandescent . . . with exquisitely evocative prose the likes of which we rarely encounter.”

The action of Andrew Winer’s remarkably complex and multilayered work, The Marriage Artist, is the investigation into his wife’s death by a present day New York art critic whom we first know only as Daniel, the strategic revealing of surnames being one of the conventions Mr. Winer uses to build suspense.

His wife Aleksandra plummeted—along with the artist whose career Daniel virtually made—from his studio window to the concrete pavement below. Written as a prologue, this descent is an exquisitely written foretaste of the brilliant images throughout the novel:

“The sidewalk is still far below her, discolored with patches of brown and black, but it is expanding quickly, rising as if to absorb her. She has little sensation of descent. This is what falling feels like. Around her the air, life giving and loyal all these years, yields easily despite its wet summer night thickness. It is making way for her. It is assenting to her death.”

Here, Mr. Winer introduces two leitmotifs that are repeated throughout the novel: thickness and falling. Both have literal or symbolic meanings depending on context. Thickness can mean fullness, describing moments of time so filled with life they seem thick. At other times, thickness is used to describe obfuscation or denial. Falling can be a literal fall, as in the prologue, or a fall from grace, a disappearance from history, or a falling away from faith and tradition, and ultimately the freedom of falling from the confines of life.

Why was Aleksandra with Benjamin in the first place and why did they both die the same way after the opening of his latest installation, which was ostensibly about the dead of 9/11, but it turns out to be about far more?

The work was composed of hauntingly serene intertwined figures apparently floating or falling through space. Shortly before her death, while sitting transfixed by one of the figures, Aleksandra told Daniel that his review had completely missed the point. Were she and the artist lovers? Was it a suicide pact? Were they pushed, or did one of them push the other then jump out of remorse? What WAS the point?

These are the questions that drive Daniel to untangle the mystery of Benjamin Wind that started three generations before.

It is an uncomfortable truth that the greatest life changing decisions turn on the smallest and most seemingly inconsequential moments. A small choice, which may even be forgotten, can so alter the course of one’s life that its repercussions can be felt for generations.

So it is with Joseph Pick’s decision as a boy of ten living as a fully assimilated Jew in Vienna, Austria in 1928, to pick up a brush and become a marriage artist, a painter of ketubot, traditional Jewish illuminated marriage contracts.

Josef’s father assimilated into early 20th century Vienna, Austria, by dropping his Jewish name, Pommeranz, becoming a Christian, and adopting the name Pick. The first indication the boy Josef had that he was Jewish was during an obligatory visit to the Leopoldstadt, the Jewish quarter of Vienna, where he is introduced to his Grandfather Pommeranz, a rabbi who made a meager living by blessing food and painting ketubot. Grandfather Pommeranz was an Ostjude, or a Jew from the Eastern principalities, who was decidedly old school, so much that he was an embarrassment to Josef’s father. Josef’s to follow in his grandfather’s footsteps and become a marriage artist alters forever his history as well as that of his posterity.

Mr. Winer’s skillfully plotted novel is Josef’s story. Daniel acts as detective, seeking out clues and connections that are scattered about through nearly a century and over two continents, rooted in the antiSemitism of Europe the ultimate expression was the Nazi concentration camps.

Each ketubah that the marriage artist paints is specific to the couple entering a marriage. The illuminated borders, similar in form to those found in the Book of Kells, are composed of images and symbols from each individual’s personality and family heritage and surrounds the Hebrew text of the actual agreement. It requires an understanding by the artist who paints it of what brought each couple together and the dynamics of each union—what exactly it is they are agreeing to.

Grandfather Pomerantz tells Josef, “. . . marriage demands of us the impossible . . . the husband and wife, naively jumping into this great mystery, are left to shape it according to a vision they don’t have. . . . A good ketubah, in words both practical and poetic, illuminates the mystery of the union of man and woman! . . . A good ketubah helps give them a vision. A start.”

He tries, in painting his first ketubah for his parents, a vain attempt to fix their failing marriage, and his grandfather recognizes an extraordinary talent and insight and, under his mentorship, the boy does in time and with practice become one of Austria’s best painters.

But there is a cost. In interviewing thousands of couples that will mostly end up leading “lives of quiet desperation” he loses faith. Failing to fix his parents’ marriage and failing to guarantee so many others, he soon becomes disenchanted with its value as an institution and even in the existence of love.

It is upon meeting one of these doomed couples, the wealthy Herr Weiner and his young bride, that he forms a friendship with Weiner’s son, Max, a man who is to figure prominently in everyone’s life from that point forward. As teenagers, they make a solemn pact between them never to marry. That this particular friendship should have such intense ramifications in modern day New York with the death of Daniel’s wife Aleksandra and her alleged lover Benjamin Wind, seems as inevitable as a Greek tragedy.

The two stories that of Josef Pick and Daniel’s investigation of the mystery of his wife’s death run parallel to each other throughout the narrative. At first we wonder what the two stories have in common, but our patience and our faith that they are inexorably intertwined is wonderfully rewarded.

As Nazis invade Austria, there are a few fortunate Jews who have immigration permits to travel to Palestine. Josef Pick is not one of them. Hannah Englander is. Max, who is a fervent Zionist who has a permit, has arranged a marriage between them so Josef can use hers. They meet in the line to the marriage office.

Max has a stake in getting Josef out of Austria and away from danger and in the marriage being merely a utilitarian relationship without a trace of love in it. Hannah has also vowed never to marry and was only talked into it at the last minute. It’s not that she dislikes men; she just doesn’t want to give herself to any of them.

“How could she tell these vital young men that even in their eager eyes she saw life continually thinning? How could she tell them that she loved them? That her heart breached at the very thought of them, not because she was attracted to them as individuals, but because they were a part of all autumnal things forever folding into oblivion.”

Or as Max describes her while waiting in line prior to Josef’s arrival:

“You destroy love … you let men fall for you then you stall them off . . . that would be too beneath you, because men are real. You can only love nothingness. . . . You don’t know what love even looks like. You have an approximation at best. That’s why you focus all your love on your god—you can only love an approximate thing.”

The examination of the many different ways people love and the reasons they marry is the great strength of this novel. There is such depth of understanding, compassion, and emotional wisdom in these pages that it often takes our breath away. We want to follow the compelling sweep of the story and yet we are stopped by ideas and phrases that really demand more pondering. The book is thick with them. A few of these are:

“It takes a lot to fill a small heart.”

“History records what we do, not how we love. No, the latter is one of marriage’s immeasurable burdens: to register—to somehow record—the other’s care.”

This human hunger—and in the end likely nothing else—was what made a marriage, or any authentic relation, stick.”

These phrases don’t come across as preachy in any way; they are believable manifestations of each characters’ soul, the words like leaves floating on the waves of a deep emotional river are genuine expressions of the mystery and complexity of human relationships and the ways they’re “filled with love to the extent that love means letting your lover understand themselves by way of misunderstanding you.”

After his wife’s death in the company of the artist, Daniel is left to ponder what brought them together in the first place when they were both married to someone else, in other words, why people have affairs:

“Why would two people pursue a path that no matter how much pleasure it might lead to was guaranteed to produce pain? What makes people want to try something that will harm themselves (and probably others)? Is it because they actually enjoy suffering?

“No . . . people behave this way because they are worried. Worried that genuine, undiluted emotion will pass by if they do not reach out for it. Worried that they will be cheated of life’s thickness.”

The Marriage Artist is one of those rare novels that meet all the criteria for greatness: It entertains, informs, enlightens and finally and most importantly, it inspires. The magnificent writing is incandescent in the way the images illuminate the darkest corners of the human mind and heart and bring the forgotten shadow shapes that lurk there in to sharp relief. It is transcendent in the way it quickly makes those shapes that while painfully unique to each character, also universal.

We come away with a greater understanding of our inner selves and the complexities of the human heart—an achievement that few other writers are able to achieve, and Andrew Winer accomplishes this with exquisitely evocative prose the like of which we rarely encounter.