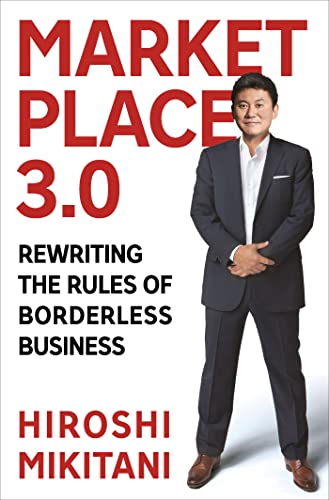 Between 2000 and 2006 Hiroshi Mikitani grew Rakutun, the company he founded and leads as chief executive, from $35 million to $12 billion in revenues, with 10,000 employees operating in 19 countries. While growing the top line by a factor of 350 might be the near norm in Silicon Valley or a few other places in the world, this entrepreneur did this in a place whose culture revers rules, tradition, and continuity while frowning upon disruption and rule breaking by breaking many of the rules of Japanese culture.

Marketplace 3.0 is the engaging story of how a brash young man abandoned a promising career at the Industrial Bank of Japan to start a new enterprise, which has evolved to be the third largest e-commerce marketplace company in the world.

Hiroshi Mikitani was not willing to take the time to wait and play it by the rules as was virtually everyone else in Japan. Instead he insisted on “rewriting the rules of borderless business,” the subtitle of his new economy strategy treatise.

Introducing his approach Hiroshi Mikitani writes, “Rule breaking isn’t always quick and easy. Still, it is necessary in the changing world we inhabit. At Rakuten, we think of the company as being on the cutting edge of coming change. If 2.0 described the way digital life shifted to the Web, then 3.0 is the next sea change—the evolution driven by personalization, intelligent search, and user behavior.”

Just how revolutionary is his rewriting manifesto? Consider that the entrepreneurial journey which he describes in this volume, involves rewriting the rules of language, power, expansion, acquisition, corporate culture, the Internet, e-commerce, operations, and giving. His insistence on speed follows from using time most advantageously, for as he observes, “Time is more important than a skill. This is a truth that everyone could benefit from if they would only embrace it. It is simply a question of math . . . these are conditions that no one can change. What differentiates one person from another is how efficiently that person uses time. Someone who moves swiftly will always have the edge over someone who does not. The effect is as if the first individual has been granted exponentially more time to achieve his or hers goals.”

The five principles at Rakuten are:

His primacy of making speed a personal and corporate priority is linked to his insistence on “continual incremental improvements—small, daily improvements . . . it is not enough to simply work diligently every day. Just be a little more efficient today than you were yesterday and just a little more efficient tomorrow more than you were today. . . . In terms of business, even a 0.01 percent improvement is fine. If you make 0.01 percent improvement each day, after a year, you would be 44 percent better at what you do.”

What Hiroshi Mikitani proselytes is all the more remarkable because the ideas underpinning Rakuten are very un-Japanese, for Japan is one of the most structured, ordered, rule-abiding places on the planet. Cultural traditions loom large in Japanese businesses. Individuals in these businesses are expected to know their place: to put in their time as salaried employees decade after decade. Only late in their careers might the lucky few dare to consider the prospect of significant authority.

Empowerment at Rakuten is neither employee flexibility in the working context nor “a nice add-on that allows employees to feel good on a daily basis. Instead, it is a core business strategy—one that pervades everything we do, from my office down to the ranks of all of my employees and out into the merchant and vendor community . . . empowerment is not a line in the human resources manual. It is our goal in everything we do and what sets us apart from many of our e-commerce competitors.”

Hiroshi Mikitani is a proselytizing evangelist committing to change the world. He believes his work is “my social mission. For me, the Internet and the business of e-commerce are more than just a way to make a living. . . . I chose the Internet in part because I could see that in addition to building a company, I could improve the lives of others around me.

“No company can be truly great unless it is doing something to make life on this planet better. And there are so many ways an Internet company can improve life. . . . [raising] the purpose of my company from making money to improving the human condition.”