The Marines in World War II 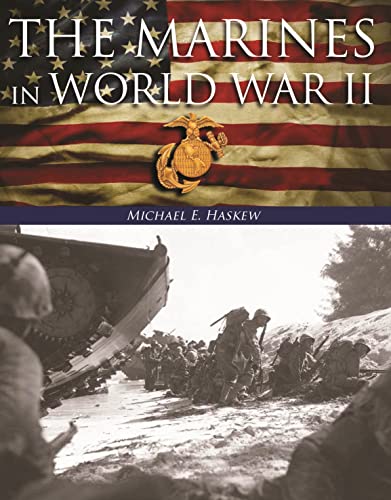 Virtually everyone should be aware of the accomplishments of the United States Marine Corps in World War II. It was in the literal thick of the fight in the Pacific Theater of Operations against Imperial Japan, suffering thousands of casualties from Guadalcanal to Okinawa while, at the same time, earning lasting glory in multiple ways as the pre-eminent and elite fighting force of the United States military.

This publication is essentially a chronological recounting of the Marines’ campaigns. It provides much in the way of detail and statistics on each just not everything that could be told. In addition to the narrative in each chapter, there are additional sidebars of interest on prominent Marine Corps figures such as “Pappy” Boyington and “Chesty” Puller as well as female and African-American Marines, training facilities, weapons, and the short-lived Raider Battalions.

The Introduction provides a short history of the Corps prior to World War II. The proceeding eight chapters individually cover the campaigns from the events of Pearl Harbor, Wake Island, and Midway, in the early months of the war, through those of Guadalcanal, the Northern Solomon Islands, and Bougainville, Tarawa, the Mariana Islands, Peleliu, Iwo Jima, and, finally, Okinawa.

In a short aside, for those unfamiliar with the Peleliu operation, it is rightfully and understandably discussed in the chapter entitled Painful Paradox. Its necessity was questioned then and the controversy in terms of that continues up to the present day.

The Conclusion summarizes the Marines’ accomplishments, casualty figures, Medal of Honor numbers, and contributions that are still being assessed more than 70 years later. It also includes a sidebar on Marines in the European Theater of Operations and the little known exploits of Colonel Peter Ortiz and 41 “Covert Marines” who operated under the auspices of the Office of Strategic Services (OSS) in France, conducting various efforts against the Germans.

The text is a mixture of the preliminary preparations, statistics, and descriptions of the fighting, interspersed with accounts of unit and individual efforts. These were the result of personal actions in leadership and/or in combat, many ultimately recognized with decorations such as Bronze and Silver Stars, Distinguished Service Cross, the Navy Cross, and Medal of Honor, with many of these being posthumously awarded.

Not every chapter contains a map of the operation or campaign in question, unfortunately. However, those that are provided have scale and are colored, with details of landing beaches, airfields, advances, notable topographical features such as rivers, mountains, or heights, and specifications on the individual units involved.

Each chapter has a multitude of photographs, many previously unseen by this reviewer, of Marines in combat, the topographical and climatic conditions under which they fought, and some of the well-known leaders and commanders, equipment, and weapons. In some cases, there are excellent colored illustrations that display a number of the commonly used Marine weaponry (75mm pack howitzer, M-1 Garand, etc.) and equipment that they employed to great effect.

Author Michael E. Haskew has not provided any notes or bibliography so one is left to wonder the source(s) of his information. Considering that his personal bio relates 25 years of experience in “writing and researching military history and weapons technology” and the titles of his four previous works, it is hoped that this is not a habit. Such information is a necessity for more reasons than one.

On the other hand, photo credits are listed on the publishing information page. They are primarily from the Marine Corps History Division and Department of Defense, with others from the Library of Congress and various journalistic and media venues such as Time Life and Getty Images.

The Marines have always been faithful, “Semper Fidelis” and never more so than in World War II where their organization grew to a half million men and women and six divisions, and included artillery and aviation along with the usual support elements.

Although there have been many books written on individual Marine Corps campaign operations and battle studies, this book gives just the right mix of everything: It covers all of their World War II operations with just enough information and detail, in conjunction with the maps and photographs, to give readers a good basic knowledge of the Marines’ efforts, sacrifices, and glory earned in the world’s greatest conflict.