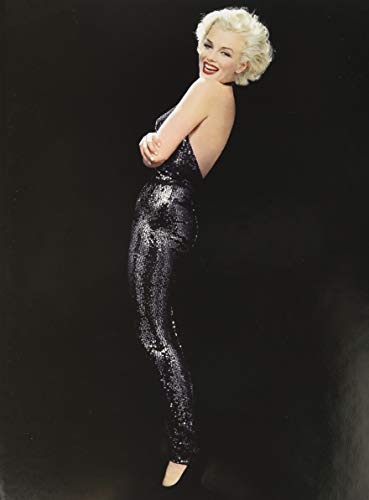 At this time of year, the marketplace is rife with books filled with pretty photographs and no substance, but Mr. Wills provides us with one of the more informative volumes that fits into the photograph-packed category.

What sets this book apart from its “relatives” is the last section of the book that follows all the glossies. The very last pages are devoted to an interview with the actress that appeared in Life magazine in 1962. It is here where we get to know Marilyn Monroe, the actress, the person beyond the personage and Norma Jean. Without this addition, one would have only had a beautiful collection of rarely seen or never before seen photographs of the screen icon.

One would be hard pressed to find another screen star or any kind of star who has had as many books devoted to them, as many photographs taken of them or really has lived on for many decades after their death. The only other “pop culture icon” that comes to mind is Elvis Presley, but even he doesn’t measure up to the “ink” or media attention that is lavished on Marilyn year after year. The intrigue stemming from her celebrity has spanned decades and generations and will continue to do so especially after perusing this testament to her beauty and longevity.

Mr. Wills affords us a look into many aspects of Marilyn Monroe as she is remembered by some of the film industry’s great actors, directors, and technical people of that era as well as from some of the most celebrated photographers, as well as just people who had the pleasure of knowing her personally.

Another aspect that Marilyn Monroe: Metamorphosis offers us is that it does not portray her as the “poor insecure Marilyn” that is so often thrust at us. Instead the author shows us the evolution of one of the world’s most enduring film and cultural icons from factory worker to world famous actress who was hailed as a great talent.

Lastly, Mr. Wills leaves us at the height of her powers; when she was the most beautiful, at the top of her game, and the most celebrated. It is as if you wish she had lived on just to know what her destiny would have been. He leaves us a bit melancholy and yet happy to have made her acquaintance through his eyes.

Marilyn Monroe: Metamorphosis is a celebration of her as a beauty, a style icon, and a human being that will tickle those of us who are old enough to remember when she was real live headline news as well as those who have only had the misfortune of only knowing about her after her demise.

Marilyn Monroe: Metamorphosis is as much about the star system as it is about how one can evolve from small town girl to mega star via her personal strength, ultimate self-knowledge, and talents.