Marie Curie and Her Daughters: The Private Lives of Science's First Family 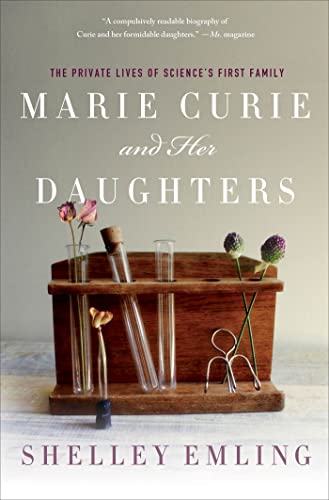 Everyone knows Marie Curie as the winner of two Nobel Prizes, the first person—man or woman—to be thus doubly honored. What is less widely known, and what author Shelley Emling makes clear in this absorbing narrative biography, is that Madame Curie was a widow who continued her groundbreaking research while raising one daughter who ultimately became an international journalist and humanitarian, and a second daughter who earned a Nobel Prize of her own.

Aided by a cache of private letters and documents shared by Madame Curie’s granddaughter, Hélène Langevin-Joliot, Ms. Emling begins her depiction of the scientist where most biographies end.

In 1911, Madame Curie attended a conference in Brussels focused on “The Theory of Radiation and Quanta.” She was there to talk physics with the likes of Albert Einstein and Max Planck. Forty-three years of age, she was the only woman among twenty-three men when she received the news that she’d won a second Nobel Prize.

It should have been a glorious moment, but it came when her personal and professional life was in shambles. She’d recently been denied a seat in the French Academy of Sciences, as much for being born Polish as for being born a woman. And scandalous news soon became become public: Marie was having a love affair with a married scientist—and younger man—Paul Langevin.

During that tumultuous year, Marie sent her two daughters, Irene, 13, and Eve, 6, to Poland, their first visit to Marie’s homeland. This was the first of many such extended separations. The girls were sent off with a governess when Marie became sick with a kidney lesion, probably due to her work with radium.

At the beginning of WWI, the girls were kept at l’Arcouest, a seaside town in Brittany. The letters between mother and daughters flowed throughout these separations, full of complex math problems, foreign language grammar, and discussions of politics.

One would think a woman so dedicated to science would steer her daughters in a singular path, but Marie’s attitude toward education was openminded. Though Irene, the older daughter, showed great facility with math and science and in later years worked in one of the two research institutes Marie established, Marie never forced either of her daughters into a particular career.

“That one must do some work seriously and must be independent and not merely amuse oneself in life,” Irene once said, “this our mother has told us always, but never that science was the only career worth following.”

This was particularly sage advice for little Eve, whose early musical talents never quite rose to a professional level, but whose good humor, boldness, and patriotic verve later earned her the Croix de Guerre for her work with the Free French during WWII, and the rank of Officier de la Légion d’Honneur of the Republic of France—the country’s highest decoration—for her work at UNICEF.

Madame Curie will forever be known for the basic research she accomplished in atomic physics, her two Nobel Prizes, and the fact that she succeeded when, as a woman and a foreigner, both her intelligence and loyalty was suspect.

Ms. Emling’s riveting new biography reveals in page-turning prose the life-balance struggles of a true genius. It’s a tip of the hat to the private Marie, the single working mother, whose many accomplishments include her two amazing daughters.