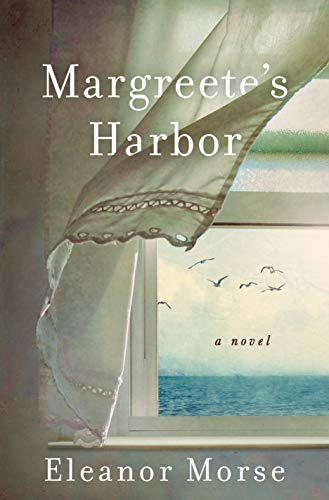 As quietly as snow falling on “every tip of the picket fence that leaned drunkenly toward the road, . . . [on] the red flag on the mailbox, the peaked roof of the bird feeder” in their small town in Maine, Margreete’s Harbor follows the middle class Furber family through the tumultuous years from 1955 to 1968.

Martin Luther King Jr.’s “I Have a Dream Speech.” The assassination of President Kennedy. Homophobia. Adultery. A mother juggling career and child care. The Vietnam War draft and antiwar protests. Dementia. Sexual abuse by a teacher. The family passes through all these political and social trends, yet is rarely pummeled.

The plot is minimal: Liddie, a cellist; her husband, Harry, a history teacher; and their young children Bernie and Eva move from Michigan to rural Maine to live with Liddie’s mother, Margreete, whose dementia is becoming dangerously worse. (A third child, Gretchen, is later born.)

A few narrative questions run through the book. While Harry soon gets a job teaching history at the local high school, Liddie wonders if she will ever find a place in a string quartet or orchestra. What damage will Margreete do as she keeps wandering outdoors at night? Will Harry have an affair with the nurse at the local hospital? Does Bernie dare tell anyone that he’s gay and in love with his best friend, Noah?

“Sitting next to his friend this close, their feet stretched out and almost touching, he hurt all over . . . Never had he heard any man on TV or anywhere else admit to this.”

The mood is more sweetly nostalgic than brutal. (Try to imagine, today, a 13-year-old boy in flip-flops hitch-hiking 20 miles by himself, as Bernie does, to reach a chartered bus that will take him to King’s speech.)

The few moments of dramatic tension—such as when that boy, Bernie, misses his bus and is stranded at a highway rest stop—are quickly resolved.

Instead, what carries this novel are the background narrative lines and the rarely spoken love among the family. These are good people, trying to find their way among myriad ethical quandaries.

Is Harry just indulging his ego when he lectures his classes on the immorality of the Vietnam War, at the risk of losing his job? Is nine-year-old Gretchen being a spoiled brat when she refuses to eat because the farmer next door has taken a new calf away from its mother, which was normal practice in the 1960s, but is today a quaint tradition called family farming?

“That little girl of yours is ruling the roost,” the farmer warns Harry. “You’re expecting me to change what I do with my own cows so she’ll go back to eating her cornflakes.”

In trying so amiably to encompass so many people over such a long timeframe; however, author Eleanor Morse glides too blithely over major upheavals, personal as well as political. For instance, Harry and Liddie need only a few pleasant conversations to apparently resolve any doubts about uprooting their family from Michigan:

The most original voice is that of Margreete. Starting on the first page, her actions seem almost reasonable, until gradually the narrative meanders more and more off-kilter. She “spooned some bacon drippings into a frying pan to fortify the bread crusts she’d saved for the crows.” Then she goes upstairs to take a bath, leaving “flames [that] licked around the edges of the pan.” After she smells something burning, she grabs a hose but can’t remember how to use it.

But don’t count her out: When a firefighter offers to get her some fresh clothing, Margreete pointedly replies, “Not underwear. I don’t allow men in my underwear drawer.”

It’s okay to visit a tumultuous time without being overly dramatic. Still, the book could use a little more spice from Margreete and that farmer.