Margaret Thatcher: At Her Zenith: In London, Washington and Moscow 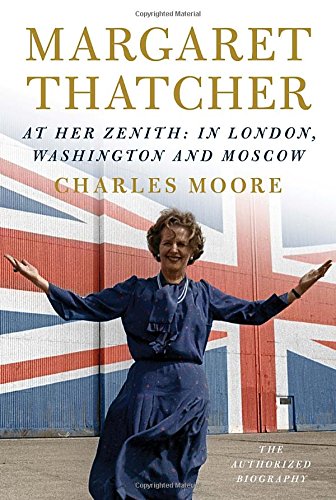 Charles Moore’s second volume biography of Margaret Thatcher, Margaret Thatcher at Her Zenith: In London, Washington and Moscow addresses her rise to the top and her stay there for eleven and a half years.

Reading this book and comprehending all of its contents is a challenge. That is not a criticism; it is an observation. The number of events and topics covered in this book flow forward and backward through time, and in order to clarify something, Moore will often make reference back to one chapter or forward to another.

At times he references his first volume for additional information. This is understandable considering the number of events and situations that any politician of Thatcher’s position must juggle. For the layperson, this movement is at times difficult to follow chronologically, but the events of both British and International importance raise the level of interest in this woman’s life far above average. It should be noted that Moore provides a chronology at the beginning of the book that helps the reader understand what events are occurring and when.

There are many issues spanning 1982 to 1987 touching on a multitude of events and people who contributed positively or negatively to those events. This book is riddled with intricacies, and it would be nearly impossible to cover this period in Mrs. Thatcher’s life without the minutiae associated with her government. Taking all this in just proves to be a struggle. Throughout the book Moore also provides detailed footnotes about specific events and in many instances, the history of the people involved. This information is most helpful in following the path of British government and how it functions.

Although the book is sometimes difficult to follow, there are a number of very interesting situations that make it hard to put down.

Moore begins this story immediately following the Falklands War in 1982, and follows her through her second and third election victories of 1983 and 1987. It was shortly after this war that the issue of the 99-year lease of Hong Kong and its surrounding territories began to rise to her attention. Although action on this issue was not scheduled to occur until 1997, discussions began in the early 1980s. This particular discussion shows the empathy that Thatcher had for the fate of the residents of Hong Kong as the end of the lease approached.

Mrs. Thatcher developed a strong bond with President Ronald Reagan, and yet Moore discusses how even that close relationship had its downside when, for example, President Reagan intentionally excluded Mrs. Thatcher from discussions and planning of the Grenada invasion of 1983 until the very day before the attack. The delay effectively prevented Thatcher from participating in the decision to move forward. Moore’s detail on the relationship between Britain and the United States throughout this event is fascinating reading.

The Coal Miners Strike that began in March 1984 and continued until March 1985 was fraught with fear, threats, and disillusionment, and her success at resolving the issue was nonetheless bittersweet on many levels. Moore details her character throughout the strike as “not . . . in a bad light” and he discusses her empathy with the fate of the coal miners.

The Cold War was another issue of great concern to Thatcher, and Moore begins this part of the book relating details about how she developed her relationship with Mikhail Gorbachev in spite of wary feelings between the West and the Soviet Union. This section shows her skill at stepping through a landscape of international issues such as SDI and espionage agents and coming out unscathed.

One of the most interesting topics covered by Moore is the Brighton Bomb incident. Her relationship with Ireland was vague at best. She was not familiar with government personnel names, and presented no political initiative to change the relationship between Britain and Northern Ireland. Moore’s description of this event and its aftermath is riveting reading.

Moore continues to document the remainder of her second term and her third term in great detail. Politics, being what it is, surges throughout most of the chapters; one of the most interesting is about the Westland Helicopter situation in Chapter 14 where Moore says:

“To many . . . it seemed mysterious that an argument over the future of a West Country helicopter company, then worth about £30 million, should have convulsed a successful government with a parliamentary majority of 140. Yet that is what happened, and by the end of it all much would be revealed about how her government worked—or did not work.”

The reshuffling of the cabinet resulted in significant consequences for the Westland story, and is one of the more fascinating reads of the politics of Mrs. Thatcher’s administration.

In terms of a reference for the Prime Minister’s work during this period, Margaret Thatcher: At Her Zenith is an excellent book and probably best digested as just that: a reference work. Chapter by chapter, Moore covers a multitude of Mrs. Thatcher’s daily, weekly, monthly activities in great detail.

While each chapter deals with a particular situation such as election plans, miners’ strike, the Soviet Union, relations with Northern Ireland, Ronald Regan, and more, it stands to reason that the chronology of this period is not an exact science.

That being said, this is an excellent book and brings Mrs. Thatcher back into the forefront long after her departure from the political scene. It is informative and interesting and belongs on the library shelf of anyone who appreciates the intricacies of British politics.