The March on Washington: Jobs, Freedom, and the Forgotten History of Civil Rights 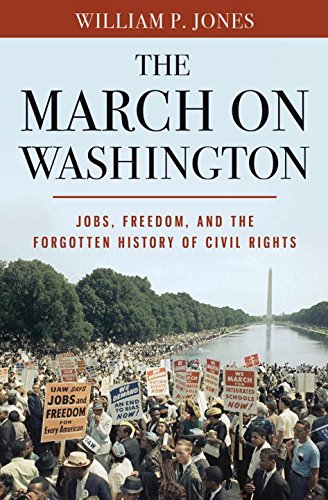 This was one more step in the long battle for gay rights and for gay Americans to be treated as full equals, not second class citizens. The following decision, Shelby County v. Holder, the Supreme Court struck down the key provision in the 1965 Voting Rights Act whereby voting districts with historically segregated communities (mainly in the South) had to undergo a “preclearance” requirement before enacting changes in voting laws.

Then only a few weeks later a Florida jury acquitted George Zimmerman of second-degree murder charges for shooting Trayvon Martin. That these events transpired before the upcoming 50th anniversary of the 1963 March on Washington is telling.

While the United States grapples with important legal, moral, and cultural questions, William P. Jones, professor at the University of Wisconsin-Madison has written The March on Washington: Jobs, Freedom, and the Forgotten History of the Civil Rights.

Despite 50 years of history, countless advances in civil rights, Americans are still wrestling with how to deal with race and racial issues.

The “I Have a Dream” speech given by Martin Luther King, Jr. at the March on Washington has become American gospel. It is now part of the secular liturgy of American speeches, held alongside the Gettysburg Address, and the sound bytes associated with Presidents Franklin Delano Roosevelt, John F. Kennedy, and Ronald Reagan.

Mr. Jones gives added historical context to King's remarks, bringing forward the life story of A. Philip Randolph, a trade unionist and labor organizer. King's speech was utopian and poetic, its power undeniable and unforgettable. The assassination of Martin Luther King in 1968 would elevate his status within American historical consciousness, while A. Philip Randolph would fade into the background.

Randolph worked for the Pullman Company and was active in the Brotherhood of Sleeping Car Porters. Throughout his career, he would focus on the close connections between organized labor and race relations. Civil rights activism did not focus on abstract issues like dignity, equality, and virtue, but targeted concrete things like access to skilled labor positions and racist union membership standards.

Today the political alliance between left-leaning politicians and organized labor seems natural and obvious, Mr. Jones debunks this popular notion ingrained in the mythology of American history. For decades, African Americans have voted for Republicans. In fact, Randolph and other African Americans in labor were wary of the Democrats. This has to do with the regional eccentricities of each party.

Following the Civil War, radical Republicans enacted harsh measures on the Southern states, bringing them into line and enforcing the newly passed 13th, 14th, and 15th amendments, giving former slaves the right to vote and birthright citizenship. For decades, the Democrats included a Southern regional contingent calling themselves Dixiecrats. As the old saying goes, “The South lost the War, but gained the Senate.” Robert Caro has made a career tracing Lyndon Johnson's adept legislative trench warfare against the Dixiecrats in his quest to pass broad social legislation.

In this life story of A. Philip Randolph, the reader will witness a man of the utmost integrity dealing with the murky issues of labor relations, political gain, and gender disenfranchisement. While he began under the ideological sway of the Industrial Workers of the World (the “Wobblies”), he distanced himself from more hardline leftist groups associated with the American Communist Party.

Despite alienating the radicals, he began the March on Washington Movement, with its initial goal to organize a march in 1941 to protest discrimination in the workplace. At the last moment, it was called off. President Roosevelt finally acquiesced and promised Randolph more diligence in combating prejudice in defense-related projects.

Over the years, Randolph did have several successes, including organizing the 1963 March on Washington. But it was not an idyllic rise from success to success. During these years, women became more and more angered at his treatment of their cause. Like race, gender was part of the equation for equal treatment in labor. Unfortunately, women working in the civil rights movement found themselves sidelined. This would lead to the rise of the Feminist Movement in the late sixties and early seventies, seeing it as a separate entity from the civil rights movement.

William P. Jones writes a spellbinding history of the civil rights movement. Characters and movements come to life with his retelling of this hidden aspect of African American activism. It is prescient, since the modern political scene wrangles with the variety of political consequences associated with naturalizing the millions of undocumented immigrants. While the debate over immigration is about civil rights, it is also about labor.

With a weak economy still attempting to right itself after decades of fiscal irresponsibility and deregulatory mania, people in the United States become very sensitive about anything that could jeopardize job security and personal advancement. It is easy to make everything a race issue, but Mr. Jones has given the public a fascinating exploration of the intersections of race, labor, gender, politics, and power.

The concrete practicalities of civil rights activism involved access to job opportunities, not just racial equality. The Supreme Court's decisions and the Trayvon Martin case once again show citizens that the issues of race and equality are far from settled. Mr. Jones's March on Washington allows the reader an opportunity to become more informed about these present-day issues, providing a means to step beyond simple reaction and hysterics.

The book will give the reader historical insight into how racial inequality can be confronted and overcome. A. Philip Randolph fought racial inequality not with well-meaning rhetorical platitudes but with organization, action, and perseverance.