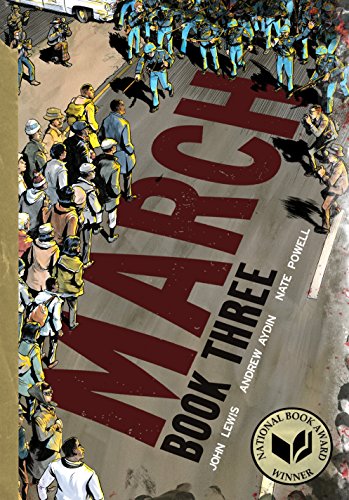 In the opening pages of March: Book Three, the 16th Street Baptist Church in Birmingham, Alabama has just ended its Sunday school lessons when a bomb explodes. Killing four young girls, the device not only destroys the building, it also sets off a bonfire of reactions around the town and the state.

Within hours, a group of teenagers, all members of an Eagle Scout Troop and on their way home from a Klan Rally kill a young black child. Others ride around town in a pickup truck, throwing rocks at blacks and screaming “Two, four, six, eight, we don’t want to integrate.”

This is the summer in 1963 and Congressman John Lewis (GA-5), then working as a speaker and activist for civil and voting rights, arrives in Birmingham on the same day as the bombing. He is joined by fellow activist Julian Bond and together they stand looking out over the devastation that the bomb has caused.

In keeping with the grace and tone of Rep. Lewis’ narration as well as the philosophy of non-violent reaction that is so important to Lewis’ work, Artist Nate Powell plays down the heart-breaking result of the bombing. We see only the blown out windows of the building and the workers cleaning up the remains.

Rep. Lewis and co-writer Andrew Aydin then slowly add details to the story. Through simple, spare word balloons that seem to rise alongside the smoke found in the debris, we learn that it was “Youth Day” at the church, that another 21 children were injured.

The next page moves to the funeral for the slain children. Dr. King is speaking and excerpts from his original sermon float over the crowd. The final panel shows an unidentified family sitting next to each other in a church pew. As Dr. King’s final words ring out, their faces mirror the anger, pain and disbelief in what has happened.

March: Book Three joins Congressman Lewis just months before President John F. Kennedy is assassinated. This is the final volume in the graphic novel adaptation of his early work and struggle in the fight for Civil Rights. As such, the violence found its first chapter is just the opening salvo in the struggle to secure voting and civil rights for African-Americans.

By now, as recounted in the first two volumes, Rep. Lewis sees nonviolence and adherence to the teachings and words of Dr. Martin Luther King as the only way to advance the cause of Civil Rights in the South. He knows that he will be thrown in jail for weeks at a time and when he is let free, goes right back to work. He has learned to organize and more importantly, how to work amongst the egos on both sides.

Despite all his experience and the dedication of those around him, the march moves with the speed of a glacier. Anything can and will affect what they are doing. When Kennedy is shot the feeling whips through the movement that “If they can get the President, they can get anyone.”

This causes others to doubt their own commitment, making it harder for Lewis to find volunteers to help the cause. While Kennedy was a liberal and seemed to be support their causes, organizers now are faced with worry about how his successor, a southerner named Lyndon Baines Johnson will react to their own struggle.

When they discover that he is going to work with them, the new President and his Administration demand that Rep. Lewis and his groups pull back on their activism. An idea that sets off arguments and discussions within Lewis’ own organization.

Rep. Lewis’ story is far from a solo adventure. He brings to light the forgotten heroes such as Fannie Lou Hammer. After hearing a speaker in 1962, this woman decided to work for Civil Rights. A decision that brought her beatings and unemployment. But she hung on to become one, as Rep. Lewis calls her “…the soul of the Mississippi movement.”

When writing of someone who opposed the work that he was doing, such as Federal Judge Harold Cox of Mississippi, who once said that Negro applicants were acting like “a bunch of chimpanzees,” Rep. Lewis lets their actions themselves speak for the person.

A local white man is being interviewed by the press when he says “we killed two month old Indian babies to take this country, and now they want us to give it to the nigguhs.” There is no reason to elaborate on stupidity and blind hate. Rep. Lewis knows that these qualities stand as their own reward.

Now over 50 years removed from the day that the church was bombed in Birmingham and many today still find a hard time believing that it even happened.

Which is exactly why all three volumes of Rep. Lewis’ March Trilogy should be made available to every school in America for free. This country has serious short-term memory problems.

In 2016 a Quarterback in the NFL didn’t stand as the National Anthem was being played during a pre-season game. The reaction was swift and the overreaction was swifter. A week later, Colin Kaepernick, understanding and respecting some of the criticism levied at him, modified his position and simply stayed down on one knee. He, like Rep. Lewis and his fellow activists, reacted non-violently.

Many of those who were upset with Kaepernick honestly thought that the struggle for the African-American to find a place in America had been solved long ago . . . you know, during the sixties . . .

March: Book Three will shake and destroy that belief. The life that Rep. Lewis has given to America is just one more in this nations’ struggle to come to terms with the sin that was and is slavery.

Kaepernick will be kneeling for a long, long time.