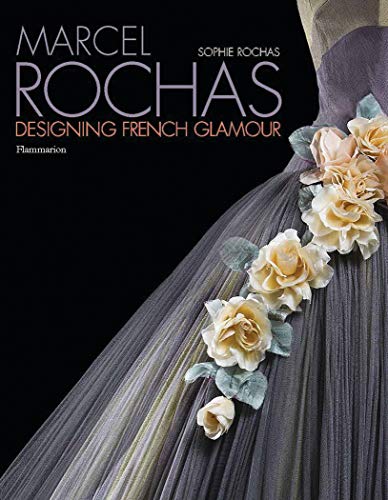 Marcel Rochas was without question a groundbreaking designer as well as an incomparable innovator no matter what era of fashion you might consider. Ms. Rochas proffers an almost encyclopedic and in-depth accounting of her father’s professional and personal life.

Ms. Rochas’ monograph provides visual proof of the everchanging tastes and trends of fashion in addition to Rochas’ prescience and esthetic. Here was an amazing businessman who survived wartime and who flourished in the post-war era with a thriving international couture business, salons, and multiple perfume and cologne brands, as well as many other brand extensions—staggering given Monsieur Rochas prematurely passed away 60 years ago. Again, the reader must place all these facts within a time frame in conjunction with the circumstances of his brand’s success.

Books of this genre can either be very dryly written or wildly engaging; Marcel Rochas: Designing French Glamour proves itself to be much more in line with the latter. Not only are the photographs proof of the designer’s prowess, but the text is equally compelling. There is a plethora of minutiae about this great designer that most will never have been cognizant of; for example, Monsieur Rochas was married three times and was considered quite a ladies’ man.

Marcel Rochas: Designing French Glamour is a star within the genre of fashion monographs as it reminds us what these designers accomplished with their now heritage and legendary brands when fashion was in its nascent state because haute couture ruled the roost. Imagine the statistics that show he employed 350,000 people working in the couture fashion areas and an additional 150,000 in related ateliers such as gantiers and embroiderers. Facts such as these are what make for a fashion reading experience rather than just a photo album of a designer’s oeuvre.

If there is anything negative to be said, it is about the section concerning the wartime era, which seems to be a boilerplate scenario for books dealing with fashion of that time. If the reader is very well read, he or she might find this information highly repetitive or yawn inducing. If the reader is less familiar with designers of that era, then he or she will be educated to the facts that pertained to designers of that specific time frame. Ms. Rochas surely might have withheld some of this data since history can easily overpower the main focus of the subject matter.

In the end, this is an incredible read for all who are attracted to fashion and its history. Ms. Rochas delivers a gift of fashion history to those of us who never seem to get enough of who and what made fashion great. Unquestionably Rochas penned an homage to her father as well as a love letter to Paris and, finally, a eulogy for times gone by.