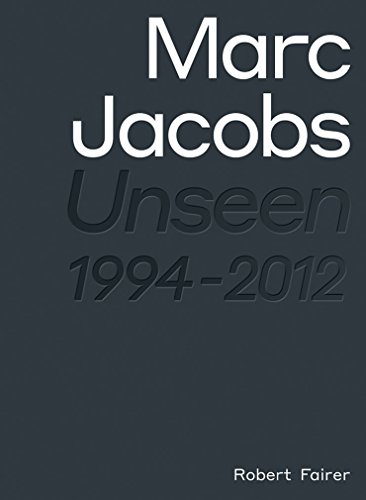 If you are a fan of Marc Jacobs and his body of work as a designer then it would behoove you to run, not walk, to buy this book. This reviewer, who is not a fan, came away with some very positive reactions after reading and seeing Marc Jacobs: Unseen; it is a case of expectation versus reality!

Photographic images are produced and shared to evoke, record, provoke, inform, and stimulate the eye. Robert Fairer has previously produced two exquisite monographs, Alexander McQueen: Unseen and John Galliano: Unseen, which dealt with a rarefied strata of fashion and designers who are exponentially defter in the art and craft of fashion. Those two rise head and shoulders above their so-called colleagues. This reader and avid fashion follower does not place Marc Jacobs in the same class, and yet Marc Jacobs: Unseen has left this reviewer with more than just several totally unforeseen and better than expected reactions and insights. Call it a fashion epiphany of sorts.

The book serves as a chronicle for the trajectory of the designer’s career under his own labels, but more importantly Fairer provides the reader the opportunity to see Marc Jacobs' output in a totally different context, and it is a far more flattering one than previously thought. Jacobs is a fashion media darling, as reflected in the preface, introduction, and terse text. He is a homegrown talent as opposed to Fairer’s previous two subjects, so let’s say that he has a sort of home town advantage by being an American designer.

The unexpected takeaways from this visual compilation are that once the clothes are not seen in show format but instead individually they take on a different meaning and character. In unrehearsed and unorchestrated settings they offer the eye of the viewer a hugely different perspective. Not only does the educated fashion eye see the clothing in an alternate environment but the informed eye can spot the references that Jacobs has so clearly and openly employed during his career as well as the trends that he has unwittingly initiated; many of these so-called trends are still in play in the today’s world of fashion. That aspect of his oeuvre was a revelation to this fashionphile. Robert Fairer has created a visual context that proffers an alternative way of seeing fashion via his decision to focus on the clothes before or after the catwalk. Again, these are not the usual runway stills we see season after season, especially since fashion has become a form of entertainment and not just a business.

From a visual/photographic standpoint, Fairer has invented his own niche within the genre of fashion monographs where he remains unchallenged. The question is whether the reader can separate his or her personal feelings about the designer and move beyond them to realize the artistry and significance of this book.