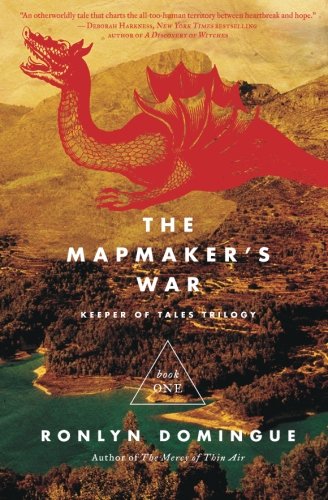 “Beautifully capturing the tone and voice of a classically told tale . . . ”

As a child, young Aoife showed promise of being a skilled mapmaker. After experiencing the incredible fulfillment it gave her, she rebels against her fate of becoming a simple wife, mother, and domestic—a gender prescribed internment that takes very little of a woman’s true self into account—negotiating instead for an apprenticeship.

Despite her desire to avoid domestic servitude to men, it’s not lost on Aoife that her current station in life is proffered from the favorable indulgence of them—a favor that could just as easily be revoked.

Not only does she yearn to have freedom and privileges—a sin in her mother's eyes—but Aoife also covets the love of Wyl, a prince promised to another.

Having proved her adeptness in her craft, Aoife is given the position in the king’s employ. Given the coveted opportunity to investigate and explore a strange new land beyond her kingdom's borders, Aoife discovers a settlement of good people, with pure hearts, and roads paved in gold.

When the secret about the golden roads gets back to Prince Raef—Wyl’s more sinister brother—along with the legend of a dragon that guards a vast treasure, the new lands become vulnerable to Raef’s plague of greed.

After Wyl is dispatched to survey the lands, Aoife secretly follows him, and together they find the hoard of treasure, as well as consummate their love. Upon their return the kingdom is elated by the news of riches and shocked by the impending betrothal of Wyl and Aoife.

Usually levelheaded and kind, Prince Wyl is quickly consumed by his brother’s lust for power. Fearing for their safety, Aoife risks her life and those of her twin infants to warn the people who had shown her such kindness.

Charged with treason, Aoife is exiled and returns to the magical new land, which has already been devastated by war.

Despite the circumstances, Aoife is shown kindness and understanding far beyond what she feels she deserves. Through the help of the people and searching deep within herself, Aoife must find a way to reconcile the pain and guilt for all she has caused and the twin babies she was forced to leave behind.

Told in the second person, The Mapmaker’s War reads like a tapestry commemorating the life of a courageous warrior who dared challenge the traditions and norms of her culture.

Through Aoife, the author illustrates an Oedipus-like tale in that despite Aoife’s conscious efforts to escape domesticity, she is unable to outrun her destiny. Through her own actions she ends up commuting herself to the very life she worked so hard to avoid.

Though the tale is positioned as a legend, Ms. Domingue taps into contemporary traditions, norms, and issues, creating a female protagonist who chooses the love of her work over societal norms.

Using Aoife as a symbol, Ms. Domingue does a wonderful job of rendering the deep introspection, pain, and guilt that many women go through in an effort to balance their life paths.

Aoife is given the opportunity to be selfish, fallible and, above all, honest. She says and does things that are considered taboo in her culture then and now. Yet these things provide her with an opportunity to fully evolve as a person and learn from her mistakes.

Beautifully capturing the tone and voice of a classically told tale, Ronlyn Domingue crafts a deeply intelligent, richly enhanced tale of magic, power, greed, and the infinite resilience of the human heart.