Murder, She Wrote: Manuscript for Murder 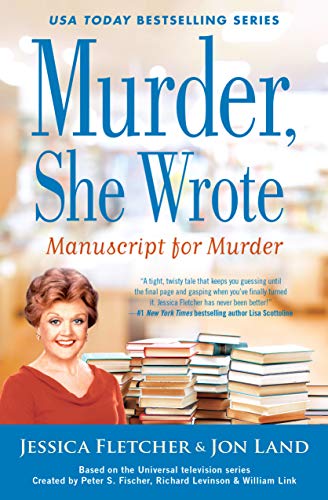 Fans of the Murder, She Wrote TV series and made for TV movies will enjoy Murder, She Wrote: Manuscript for Murder. It takes the reader right back to where the series left off, with many of the same characters.

In this one, Land (and Fletcher) take the reader into the killer world of publishing where Jessica’s long-time friend and publisher, Lane Barfield, dies. Prior to his death, Lane presented Jessica with, The Affair, a hard copy manuscript of a story he declares to be the best thing he has seen in years. He asks Jessica to read it and give him her opinion.

When fellow writer, Thomas Rudd, an author whose glory days have passed, contacts Jessica and warns her about financial shenanigans on the part of Lane Barfield, specifically cheating his authors, she refuses to believe such a story about a friend. Shortly thereafter, to her shock, Jessica learns of Lane’s death.

The police declare his death is due to suicide, the result of an investigation into financial malfeasance with his authors’ money, but Jessica doesn’t buy it, and quickly finds herself immersed in the search for Lane’s murderer.

Within days of Lane’s death, Thomas Rudd is also found dead—an apparent suicide. Too many coincidences and it doesn’t take long for Jessica to see a connection between Lane’s death, and that of Thomas Rudd.

As she digs into these two mysteries, a link begins to form between these deaths and the manuscript given to her, and she takes on the task of reading the manuscript in minute detail to determine if her conclusion is true or just her imagination. To accomplish this she seeks help from Lane’s competent young aid, Zara.

Zara quickly discovers that two other authors had been given copies of the manuscript and asked for their opinions. Hoping for more positive clues to prove her theory, Jessica attempts to make contact with both authors and quickly finds two more dead bodies.

Convincing her friends, Mort Metzger, Cabot Cove Sheriff, and Artie Gelber, New York City Police Detective, that she has not lost her mind, is not an easy task, and there is a growing fear that anyone associated with the manuscript is a target—and that means Jessica. And danger does not sweep past her, but plows right into her when her house in Cabot Cove is set on fire with her tied up inside and the only copy of the revealing manuscript curling up into ash.

Driven to find the truth, her search takes her to the pinnacle of American politics—the White House, where she solicits help from her friend, the First Lady.

As one reads this story, the movie unfolds before one’s eyes, just as the TV series did. Land (and Fletcher) have captured the fun of following Jessica’s adventures, no matter what direction they take. As the pages fly by, the excitement builds and danger lurks in every corner. Surprises arise right on up to the final “aha!” moment when Jessica uncovers the true culprit.

This is a page-turner and one not quickly set aside for another day. Grab a glass of wine and prepare to be entertained.