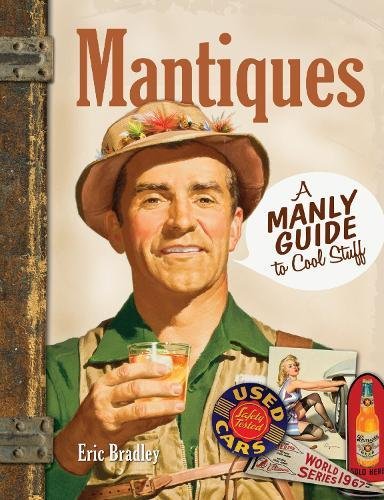 “What is in fact cool runs the gamut from the near ancient to what seems to be almost ten minutes ago. . . . Despite the male-centric premise, this is a thoroughly fascinating trawl through the attics found in the minds of many men and more than a few women.”

Across centuries and then millennia men once obsessed over collecting enough foodstuffs to endure a harsh, devastating, and yet cleansing winter. If they lived near the warmer climates, they had to outlast a sparse, dry season as the rains disappeared and the crops toasted in the sun. If there were enough skins for warmth and enough food to last into late February, they survived.

The responsibilities of men have changed a great deal since we last huddled in caves or along the banks of the Euphrates.

In modern times that need to collect, horde, preserve, and maintain in order to survive has genetically mutated into a large collection of classic hunting gear, wall-mounted heads of animals, Wurlitzer Jukeboxes, a guitar once owned by Kurt Cobain, Marylyn Monroe’s chest X-ray, and a Simoniz advertisement from the late fifties/early sixties that features a pinup in a turquoise bikini as drawn by Gil Elvgren.

Few hobbies bring the continuing and rich rewards of collecting. In many ways we all collect something. Out there, in garages, basements, the back rooms of museums, and grandma’s attic, there is something for everyone. From hoarders with piles of newspapers bound by saved twine and string to beanie babies, we take pride in what we put on the shelf.

Centering on what men like, Mantiques: A Manly Guide to Cool Stuff will someday be a collectible on its own. Few books will ever document what it means to be a man, at least in the eyes of what is accepted as coolness, better than this fun-filled volume.

Author and compiler Eric Bradley has spoken with hundreds of collectors and scoured countless auctions to discern exactly what men collect.

Turns out the answers are as varied as you would expect, for at its heart, collecting is a deeply personal hobby. It may be shared, but it is still a part of the individual. It is a hobby that moves across all different strata, areas, and income levels. It doesn’t matter what you collect, as long as you collect.

There are some topics featured in their own chapters that won’t surprise anyone. Collecting tools moves from brooms to the most valuable mantique tool in the world, a Sandusky Tool Company 1876 Centennial center-wheel plow plane that recently sold for $114,000 at auction.

Don’t get the idea that this book is about the money paid for some of the many items featured. (And yes, money is collectible, but it doesn’t exactly fit into the idea of cool).

Bradley barely needs to qualify his most excellent choices as each item by its mere appearance justifies its inclusion in this wide-ranging volume. Function matters, but so many of these collectibles are simply beautiful in their design.  Of course what is beautiful is in the eye of the collector.

There are the simple pinstripes and the cloth of Babe Ruth’s 1933 All-Star game jersey and the curved, hard plastic lines of the Ericofon, a phone designed for hospital use by a Sweden’s Ericsson Telephone Company in the late forties. One so soft and connected to the human body, the other a clean and practical tool in modern society. Each one so aesthetically beautiful in its own, deeply individualistic way.

What has actually become collectible nostalgia may surprise you. The section devoted to tech runs from a 1760 Sundial to early typewriters and then into the first Apple computer. As a point of comparison, on one side of a page sits a 1971 electronic calculator, the Busicom 141-PF. Just that designation alone makes it sing out as if it came from a Ray Bradbury novel.

But next to that sleek and efficient wonder is a still functioning 1920s working replica of Pascal’s Calculator. The original was created by Blaise Pascal in 1625 and through a series of gears, was able to perform simple calculations. In one-third of a page we see a literal example of how electronics have advanced across the last centuries.

The graphic layout of this book is stunningly attractive and addictively time consuming. It is hard to pull yourself from a single page. Your eye lingers over many of the items not only with appreciation for the item’s design, structure, or function, but with a quiet, jealous wish that something so cool and beautiful could be sitting in your living room or office.

The design and layout of the book mirrors the coolness of the subject matter. Each item has its own space, and nothing is jammed together in a desperate attempt to cram as much as possible into the book.

The information that accompanies each picture is brief, thorough, and free of any snarky comments. The details are as important as the object. In many cases the author includes the most recent auction price available.

The two pages devoted to art deco collectibles read like a guide to an exhibit at the New York Museum of Modern History. A section devoted to the outdoors covers paintings, rifles, trophy cups, knives, derringers, and a tool belt as it was used by a buffalo hunter in the 1820s.

What is in fact cool runs the gamut from the near ancient to what seems to be almost ten minutes ago. There is an authentic German flail, replete with spikes and hanging on a chain, dating to the 16th or 17th century. A few chapters later is a colorful section covering video games that almost all of us can remember playing as if it were yesterday.

Despite the male-centric premise, this is a thoroughly fascinating trawl through the attics found in the minds of many men and more than a few women.