The Mansion of Happiness: A History of Life and Death 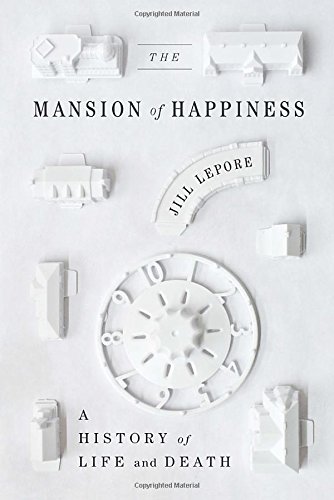 “. . . a record of human existence—past, present, and what it might be in the future.”

Ask ten people their idea of perfect happiness and you’ll get ten different answers. An exploration of that array of responses might well focus on basics such as family, money, health, or successful career.

In The Mansion of Happiness Jill Lepore covers the progression of life. She delves into passion—those special causes, projects, or beliefs surrounding birth, death, and everything in between that drive people to act as they do and how those actions have affected mankind.

In the beginning there was life. Actually in the beginning there was the “New Game of Human Life,” created by London printer and mapmaker John Wallis, which mirrored the human journey through life’s experiences and serves as the starting point for Ms. Lepore’s history. Subsequent, similar games followed, including the “Mansion of Happiness,” a version that adopted a Christian theme, preaching moral and upright behavior. Should the player violate these principles, the penalty would be a move backward on the game board and a lost turn—a clear attempt to imbue a proclivity toward good.

It was upon this pious game that Milton Bradley based his first board game, the “Checkered Game of Life,” which introduces the story. This section embodies the message in the book: “The game is a creed: life is a voyage that begins at birth and ends at death, God is at the helm, fate is cruel, and your reward lies beyond the grave.” As Ms. Lepore explains, the “secularization of progress and the rise of individualism had a great deal to do with another transformation: The shape of a life was changing.”

To take the reader through the inevitable changes that occur over time, The Mansion of Happiness: A History of Life and Death is divided into aptly named chapters from “Hatched” to “Resurrection,” covering the spectrum of a lifetime.

Ms. Lepore relates in great detail the various theories regarding the beginning of life, initially citing King Charles’ physician William Harvey, whose scientific experiments and research led to the concept that all creatures derive from eggs.

She brings in other notable scientists including Charles Darwin, Aldous Huxley, and Gregory Pincus, who offer their thoughts on the beginnings of life and upon whose theories credible—and some incredible—findings emerged.

In her chapter on baby food, Ms. Lepore bypasses the strained variety and provides readers with a detailed account of the nation’s on-again, off-again love affair with breastfeeding. She writes, “The history of food appears to follow this rule: When the rich eat white bread and buy formula, the poor eat brown bread and breast-feed; then they swap.”

The battle between bottle and breast involves socioeconomic, political, and cultural factors asserts the author. Apparently nursing is once again in vogue; Ms. Lepore cites the current First Lady’s suggestion that the IRS give tax breaks for breast pumps.

The chapter, “The Children’s Room,” offers an in-depth look at another battle, this one regarding the publication of Stuart Little, the beloved tale of a mouse born of a woman. Although the book has sold more than four million copies, its birth was a long time in coming and nearly didn’t make it. Those who’ve read the children’s story will harbor deeper appreciation for the tale after learning of the pains it underwent to reach bookshelves.

In addition to addressing the beginnings of life and subsequent stages, The Mansion of Happiness touches upon what happens at the end—not just death but resurrection of sorts. The controversy over what to do with Ted Williams’ body upon his demise brought attention to cryonics, a movement founded by Robert Ettinger.

Ms. Lepore visited the Cryonic Institute in Clinton Township, Michigan, to gain a better understanding of the process and the man behind the facility. In addition to a rundown waiting room and some offices, the institute contains a large refrigeration unit where 40 dogs and cats, a few birds, and 95 once-living humans tucked upside down inside sleeping bags await thawing at some future date. Ettinger’s deep interest in science fiction, called “scientification,” and excerpts from the movies Dr. Strangelove and Sleeper add a subtle humor to a subject that Ms. Lepore obviously finds amusing.

Aptly subtitled A History of Life and Death, this book offers a record of human existence—past, present, and what it might be in the future.

“Stages of life are artifacts, ideas with histories: the unborn, as a stage of life anyone could picture, dates only to the 1960s; adolescence is a useful contrivance; midlife is a moving target; senior citizens are an interest group; and tween-hood is just plain made up,” the author writes.

Most of the chapters within The Mansion of Happiness were originally published as essays in The New Yorker, according to Ms. Lepore. As such, while together they form a cohesive timeline from pre-conception to death and beyond, each chapter could stand upon its own merit, offering an in-depth exploration of the assigned topic.

The author’s comfortable writing style and comprehensive research make this a fascinating history, jam-packed with anecdotes, statistics, and some surprising information.