Manolo Blahnik: The Art of Shoes: A Catalogue 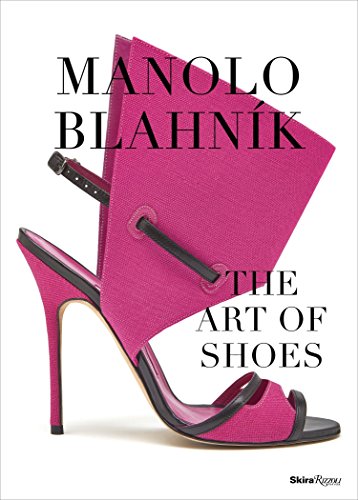 This is an exuberant and effervescent book that stretches beyond just shoes designed by Manolo Blahnik. Call it an exposé or tell all but not in the usually gossipy way or with the usual sordid connotation. This is the quintessential everything you ever wanted to know about the man, his life, and his shoes— quite literally the A to Z of Manolo Blahnik. Take note here, that while the book is lushly illustrated this is not a book that might be confused with a visual catalogue of his total oeuvre. If the reader is of the shoe obsessed variety as in the consumer sense of the word then he or she might be disappointed with the content.

“Stick to the extremes and make shoes!”
—Diana Vreeland, 1971

Cristina Carrillo de Albornoz lauds the designer as if he is a god and for some that might be just the perfect description or association. This reader was almost immediately absorbed starting with the foreword and introduction but it is with the “spoken” words of the designer that the reader can be quite literally in Blahnik’s thrall. He is all parts créateur, philosopher, child, historian, adoring fan, and self-effacingly humorous, and it would be difficult not to be taken in by these qualities. One might say he enables you to walk a mile in his shoes . . . ha!

“Building a shoe might not be an art in the strictest sense, but it is certainly an applied art. If you do not have a certain combination of artistry, skill and talent, the result will turn into a disgraceful calamity.”
—Manolo Blahnik

The extraordinary beauty of the book comes with reading it and feeling as if you were one on one with a friend who was laying bare his soul, pun intended; he reveals his predilections, his influences, his likes, his personal life, his mentors, his fascinations, his beliefs, and just about any part of his life—all play into the creation of his product.

Keep in mind that the book also serves as a catalogue for an exhibition of the designer’s work that began in January 2017 and will travel on a limited basis through next year. It is a retrospective of sorts than has been meticulously curated by Blahnik to offer an insightful look into his modus operandi when creating his works of art and what it all means when you look beyond that shoe.