Manifest Injustice: The True Story of a Convicted Murderer and the Lawyers Who Fought for His Freedom 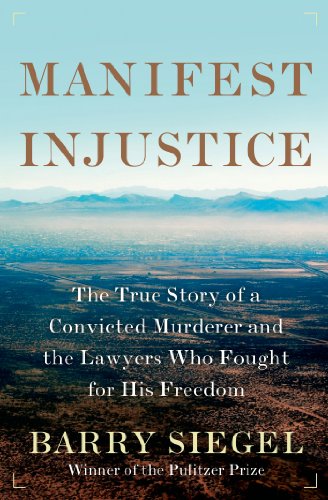 “. . . not just a story of one man, but a fascinating indictment of our judicial system as a whole.”

In the electrifying legal page-turner Manifest Injustice, Pulitzer Prize-winning journalist Barry Siegel raises terrifying questions: Could our justice system allow a woman to set-up her estranged husband for murder? Could a man spend 38 years in prison for a crime he didn’t commit? Could this really happen in America,within a legal system so many of us believe is the best in the world?

In the Spring of 1962 a young couple was brutally murdered along an isolated, lover’s lane stretch of Arizona desert. A 17-year-old witness told the police she watched a man named "Ernie" shoot the couple. Shortly thereafter, Ernest Valenzuela, a man with a violent history, confessed that he committed the murders to a sergeant at the sheriff’s department. Others interviewed Valenzuela, and he made the same statement.

Ernest Valenzuela was not prosecuted for the murders. They were considered unsolved until ten years later when a woman who worked at the sheriff’s department stated that her estranged husband, Bill Macumber, confessed to the homicides.

Macumber had no criminal past. He had no motive to kill the young couple. He was a devoted father to his three boys. He was arrested for the murders, tried and convicted.

Macumber has been in prison for 38 years. During that time, he has maintained his innocence and fought for his freedom. In Manifest Injustice, Barry Siegel recounts every dramatic twist and turn of Macumber’s legal battle with tireless precision.

Mr. Siegel brilliantly creates for the reader the essence of a jury trial: two sides, two narratives, two bodies of evidence and two theories of interpretation. Manifest Injustice stays with the reader long after the last page for it is not just a story of one man, but a fascinating indictment of our judicial system as a whole.

Mary Hanlon Stone is a Deputy District Attorney and author of invisible girl.