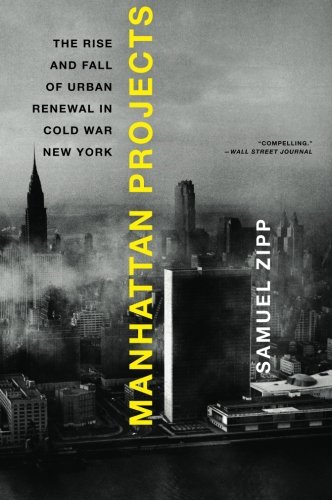 Samuel Zipp has written an intense and meticulously detailed textbook-style account of four projects that were built in post-World War II Manhattan. Zipp introduces these projects with an overview of the political, social, and economic climates that existed during and after the war. He contrasts the potential for international peace and prosperity with the looming threat of Soviet Communism that became the Cold War. His wordy explanations in the introduction are written in a heavily academic style that detracts from the telling.

Author Zipp lightens up a bit when he presents the history of the first project: the United Nations Headquarters. City leaders seized what they saw as a golden opportunity to make New York the symbolic capitol of the world. Their vision was a permanent home for the fledgling United Nations. Rockefeller money purchased the land, and the buildings were designed by a committee of architects at the top of their profession. The Secretariat high-rise became a model for future urban redevelopment.

Existing urban decay suitable for elimination was identified in the Turtle Bay area along the East River. The site, comprised of 17 acres, contained a mix of apartments, tenements, and nineteenth century brick buildings that housed the commercial enterprises, including slaughterhouses that tainted the air. The nobility of the UN was used to override the protests of the soon-to-be displaced inhabitants who were disbursed into already-crowded housing nearby or farther away.

The need for housing was one of the challenges of the post-war era. Home ownership was viewed as part of the American Dream. Large suburban developments like Levittown, New York, met part of the need. Levittown was built on 60,000 acres of empty fields and became a model for other suburban developments across the country. Middle-class flight to the new suburbs took thousands of middle-class residents away from Manhattan. An urban alternative was needed. A public/private financial partnership was formed with the Metropolitan Life Insurance Company to create a suburban-like oasis in the city. The partnership built a profit-generating apartment complex named Stuyvesant Town that included wide swaths of landscaped open spaces among the apartment towers.

In describing this project, Zipp confirms the tone for the rest of the book. He contrasts the propaganda used by notables and interested parties to further the project with evidence that the area was not all slums. The developers’ blatant disregard for the existing residential commercial inhabitants is showcased repeatedly in propaganda portraying the hopelessness of the area. Zipp emphasizes that only token efforts were made to assist in relocation.

This theme continues with the Lincoln Square project. Using civic pride and nurturing the arts, city leaders lobbied for a suitable home for music and theater in the Lincoln Square area. Again, the result was lost jobs and crowding into housing in the less desirable parts of the city. Zipp contrasts the value of the project with the losses suffered by the displaced, much as he did with Stuyvesant Town.

The last project in this book is located in East Harlem. By this point, Zipp becomes hopelessly repetitive. His review of the issues across time and around Manhattan bends back on itself. When this is paired with his long-winded sentences, a reader is likely to experience muddled thought while mentally gasping for air. Zipp often includes contradictory thoughts that add to the confusion.

Zipp makes it clear that the demand for a prosperous city fostered by business and political interests superseded the lives of its poorer inhabitants and especially those of color. These folks were ultimately cut off from moving into the middle class.

Manhattan Projects is a laborious read that falls far short of engaging the reader.