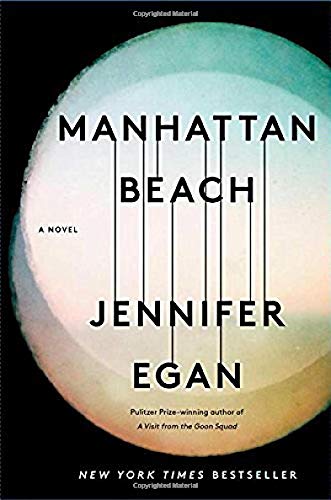 What happened to the amazing Jennifer Egan who wrote the genre-bending, Pulitzer Prize-winning A Visit from the Goon Squad and the intricately haunting bestseller The Keep?

Her newest novel, Manhattan Beach, is certainly a pleasure to read, with original, complex characters and sharp descriptions of Brooklyn during the Depression and World War II, including fascinating details about union-mob corruption and also deepsea salvage-and-repair diving.

For instance, as Anna Kerrigan, the main character, takes the last step off a diving ladder, onto the floor of the East River, “Water contracted around her legs with cold energy, suctioning the wrinkles in her jumpsuit pinchingly to her skin.”

But ultimately, this is a straightforward novel that almost any talented writer could have penned.

Indeed, it’s not even the best of the ordinary: Despite the ever-looming threat of mob violence, the plot doesn’t really catch fire until a smart twist about halfway through.

The book revolves around two Brooklyn families—the Irish Kerrigans and the Italian-WASP Styles clan—both headed by charismatic, risk-taking fathers who are lured to organized crime via different routes.

Eddie Kerrigan, raised in a Catholic “protectory” (or orphanage) in the Bronx, flourished in vaudeville in the Roaring Twenties and married a beautiful chorus girl “newly escaped . . . from a barley farm in Minnesota.”

But after the Crash of 1929 wiped out his stocks as well as his audience, Eddie turned in desperation to an old orphanage pal, now a leader of the corrupt International Longshoremen’s Union, first taking legitimate dock jobs, then becoming an outright bagman.

Anna, Eddie’s elder daughter, often accompanies him on his illegal errands, leaning against him in their car, collecting the coupons from his cigarette packs, and “drifting on a tide of sleepy satisfaction.” Thus, as the novel begins in 1934, Eddie is taking Anna, then age 11, to a meeting at the home of the nightclub owner and mob boss Dexter Styles.

Dexter, the son of a struggling, Italian-immigrant restaurateur, has vaulted simultaneously into the upper ranks of both the mob and New York’s high society. He achieved the former by starting as a lackey to a mob boss, and the latter by marrying a daughter of a powerful banker (and changing his last name).

While he has no compunctions about ordering the murder of uncooperative henchmen, Dexter yearns for more acceptance from the legitimate side of his life. The war, he thinks, could be his chance to turn his gambling and extortion rackets into patriotic businesses.

“I want to be an honest part of what comes next,” he explains to his father-in-law, the banker. “Not a leech sucking blood off its back.”

His father-in-law—with bracing cynicism that’s still apt today—responds: “Don’t be fooled by the marble columns . . . There’s a good deal of brutality behind institutions like mine, leavened by an equal measure of hypocrisy.”

Over the decade that follows the opening scene, the Kerrigans and Styleses rarely cross paths. Eddie mysteriously disappears. Anna challenges tradition and a sexist lieutenant by applying to become a diver at the Brooklyn Navy Yard.

A chance meeting with Anna at one of Dexter’s clubs sparks a smoldering sexual flare between the two. However, Anna, out of an embarrassment she can’t explain, hides her true identity from Dexter, who had long ago forgotten the 11-year-old girl who once visited him.

So there’s nothing very wrong with Manhattan Beach, other than the slow first half and Anna’s near-perfect personality: She is smart, curious, beautiful, brave, tough, loyal, talented, and selflessly devoted to her severely disabled younger sister, Lydia.

And perhaps it’s unfair to expect any writer to produce two Goon Squads in one lifetime, with that novel’s imagination, originality, and complex interweaving of time, plot, and characters.

Still, readers can hope that in her next book, Egan will find new ways to challenge herself and awe her audience.