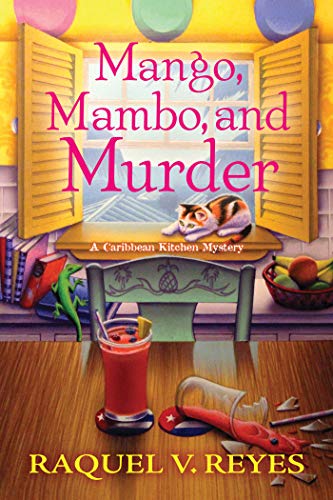 “Reyes does well when creating her primary characters. Written in the first person, this can sometimes be a challenge when developing the narrator, but Reyes is successful in introducing the reader to the protagonist.”

Raquel Reyes new book, Mango, Mambo, and Murder is set in a small upper-class area of Miami, Florida. Dr. Miriam Quiñones-Smith has relocated from NYC with her husband Robert and their four-year-old son Manuel.

Both parents are originally from the area and the relocation is due to Robert’s new work position. The protagonist, Miriam, a food anthropologist, is having problems readjusting to the new home, especially considering the problems with her mother-in-law, Marjory.

Marjory, a white Anglo-Saxon catholic, does not approve of her son’s marriage to Miriam and makes that abundantly clear. Add to this mix the appearance of Juliet Pimpkin, Robert’s old high school flame, whom Marjory favors above Miriam and the stage is set for a lot of tension.

Recognizing Miriam’s discomfort with adjusting to her new surroundings, best friend Alma takes on the task of finding activities that might help calm her friend’s nerves and settle her in. Initially, Alma gets Miriam involved with the local Women’s Club, and at the very first meeting, a young woman seated next to Miriam flops down dead in her chicken salad!

Although this does not concern Miriam other than her presence at the event, she soon joins Alma at an exercise class and before long, victim number two keels over dead.

Alma soon gets Miriam involved with a local Spanish TV food program. Miriam starts out as a fill-in, but her knowledge of Spanish, especially Cuban cuisine, soon sends her career rocketing through the Latinx communities far beyond just Miami.

But her life begins to crumble when several events occur, not the least of which is her BFF Alma being accused of murder! Can it be? Miriam knows it cannot be and takes it upon herself to find the real culprit.

At the same time, she believes that Robert has begun an affair with his past girlfriend, Juliet, and she fears her marriage is beginning to crumble.

Now, as cozies go, Reyes has a good understanding of the structure with a few exceptions. She spends too much time writing about Miriam’s return to South Florida, her uncomfortable family adjustments, her concerns about Robert and what he might be doing, reacquainting herself with remote family members, and her plans for her son’s future. While these things are important to developing her characters, she spends too much time on them and does not really get into solving the murders until about halfway through the book.

Reyes should be complimented on one aspect of her cozy, her development of Detective Pullman, the officer doing the investigation. While too many cozies make the police officer an incompetent, Reyes does not take this approach. Although she has Miriam doing everything she can to prove her friend’s innocence, Detective Pullman is displayed as competent as well as patient. He even goes so far as to involve her to some degree as his undercover person because of her relationship with the Latinx community.

Once the story moves to its true purpose—the cozy—the reading moves a little faster. An interesting turn that Reyes takes is unlike other cozies, almost from the beginning the reader knows who the guilty party—or parties—are. What remains to be determined is the why and the how of the murders. Although there are several characters introduced as possible criminals, Reyes continues Miriam’s focus on one character in particular.

On a few side notes, it is refreshing to see the diversity of this story; that is, a Latinx approach. The one caution is the over-use of Spanish words, phrases, and (in a few places) overused dialogue. While it is interesting and at times fun to learn these phrases, it has the potential to reduce the audience to just those who understand the language and don’t need the translation. For those who need the translation, for the most part, it is not there, and the reader must rely on how the scene is playing out in order to understand the Spanish. Setting the book down in order to get a Google translation is not a good idea.

It should also be noted that Reyes does well when creating her primary characters. Written in the first person, this can sometimes be a challenge when developing the narrator, but Reyes is successful in introducing the reader to the protagonist.

The story, although taking quite a long hike before really getting to the detecting, is an interesting one. Should there be additional books in this series, one can hope that Spanish translations will help the non-Spanish reader.

And don’t miss the recipes at the end of the book!