The Man Who Never Stopped Sleeping: A Novel 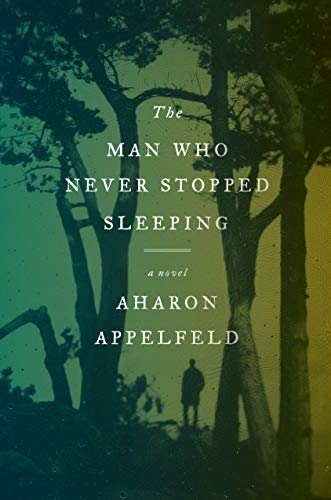 Healing is a theme that pervades Aharon Appelfeld’s prolific fiction (Blooms of Darkness; Until the Dawn’s Light; and Suddenly, Love; all reviewed on NYJB) and challenges his Shoah survivor characters. In this respect many if not most of his novels are autobiographical, and that is all the more so in his 2010 bildungsroman Ha’ish Shelo Pasak Lishon, which is now available in Jeffrey M. Green’s fine English translation as The Man Who Never Stopped Sleeping, where the first person narrator protagonist shares his author’s given names in both German and Hebrew and after surviving the Shoah migrates from his native Bukovina to Palestine via Italy.

Erwin/Aharon is a fictional alter ego whose biographical details differ somewhat from his author’s (he’s a few years older) and for whom emotional and physical healing combine with the process of becoming a writer. Appelfeld sensitively portrays the three endeavors with understatement and a spare but judicious use of metaphor.

Erwin survives the Shoah by hiding in the cellar of a gentile neighbor who makes him knit articles of clothing, which his protector and slave master sells. After the war he returns to his pre-war house, now owned by his family’s maid who kicks him out.

He joins a group of fellow survivors, and when he suffers narcolepsy they carry him hundreds of miles to a displaced persons camp in Naples, Italy. Appelfeld does not specify how Erwin remained nourished and hydrated or whether he wore adult diapers during his weeks of slumber. Years later one of his fellow refugees recalls,

“You were so handsome. We looked at you and asked ourselves, who are you, and what do you bear in your soul? Miracles didn’t happen for us during the war, but you, your existence, was a miracle. Your sleep bore witness to your connection to deeper realms, and from there you were drawing your sustenance. We were sure you would sleep forever, and we would carry you from place to place. Who woke you up?”

In Naples he awakens but continues to have vivid dreams in which he converses with his mother. There he is recruited into a Zionist group of young men who combine physical fitness training with Hebrew instruction (including changing his name) prior to sailing to Palestine where on a kibbutz the training becomes military.

Early in the first part of Israel’s War of Independence (after the United Nations approved the partition of Palestine in November 1947 but months before Israel declared independence in May 1948) Aharon’s unit is ordered to attack a well fortified position, and enemy fire shatters his legs. (The younger real life Appelfeld’s army service began a year after the war ended).

Over the next two and a half years Aharon undergoes seven surgeries and extensive physical therapy at first during a prolonged hospital stay, later in a convalescence home, and eventually in his own apartment. Throughout this period of recovery and rehabilitation, which makes up most of the book, his emotional healing takes place during dream conversations with his mother, which is reinforced by moral support from his doctor, nurses, other patients and fellow soldiers.

His mother relates, “So many things have happened to both of us, that if we came together to tell them, the nights at our disposal would not be enough. . . . And now I’ll tell you something that might surprise you: you don’t need to tell me. I know everything. We were never parted. I was always in every place you were. And now at last we’ve come back to our home.”

Aharon combines Hebrew acquisition and preparation to become a writer by copying passages from the Hebrew Bible and modern Hebrew short stories in long hand. Just as Aharon’s shattered leg bones must fuse together so, too, he intends to bind himself to the Hebrew language through his copying exercises. An artist army buddy approves of this approach and compares it to painting copies of the great masters as a learning exercise. His surgeon Dr. Winter concurs: “The Hebrew language has many secrets, and we must approach it modestly, as we approach the holy scriptures.”

Here Appelfeld reveals the sources of his style and subject: the Hebrew Bible’s terse concision and the Shoah’s never completely healed emotional wound that fuels his vivid imagination. The fictional Aharon also copies stories by future Nobel laureate S. Y. Agnon, but the real life Appelfeld eschews Agnon’s elegance and erudition in favor of simple short direct sentences, paragraphs, and chapters. Since Appelfeld first learned Hebrew as a teenager it is hard to know whether his spare style reflects an aesthetic preference or a limited skill set. Either way his understated style gets an emotionally powerful bang for its economical buck.

In addition to style and language Aharon realizes that his chosen vocation requires solitude, though in Israel at the time (and even today) introversion was widely misunderstood. The army social worker and Dr. Winter encourage him to return to the kibbutz with his platoon mates, but he holds his ground. “‘Without long stretches of solitude, I can’t live the life of a creative person,’ I told him explicitly.” And when he is offered his own apartment he feels “as though I had been offered not only shelter but also a hidden runway from which I might be able to take flight.”

Oddly, after arriving in Palestine Aharon shows little interest in women his own age, though when a hospital nurse is attracted to him he is disappointed to learn the reason is his resemblance to her deceased son. Even so, readers can rest assured that with his handsome looks, verbal acuity, and his own apartment Aharon will likely succeed in that department, too.

With its universal themes of healing, recovery, creativity, and finding one’s vocation The Man Who Never Stopped Sleeping should engage the wide readership Appelfeld’s prose deserves. Readers may want to buy extra copies and donate them to VA hospitals.

Its teenage protagonist, coming of age theme, and middle-school reading level also lend this novel crossover appeal, and though some parents and teachers may object to references to Neapolitan sex workers, in an age when teens and tweens have easy access to Internet pornography those references to 1946 era streetwalkers are rather tame.