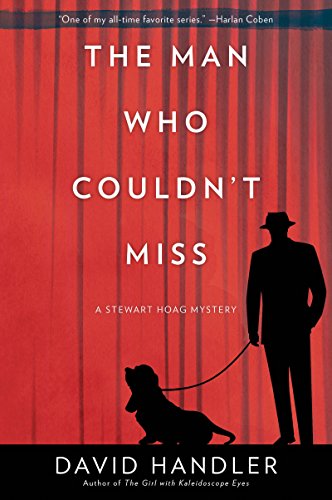 For fans of David Handler’s Stewart “Hoagy” Hoag series of the 1990s, The Man Who Couldn’t Miss” will sweep them right back to the original series—for new fans not familiar with Hoagy and his basset, Lulu, this will open a whole new world of binge reading!

Set in the 1990s, The Man Who Couldn’t Miss places Stewart “Hoagy” Hoag, a celebrity author, and Lulu, in the middle of a murder that he and Lulu struggle to solve.

Hoagy is living in his ex-wife’s (Merilee Nash) Connecticut farm home, writing his next exceptional novel. His relationship with Merilee is a comfortable one; although he remains in love with her, he is not sure if the feeling is mutual.

Merilee, an Oscar winning star of the first caliber, is directing a gala performance of Private Lives at The Sherbourne Playhouse, a local theater where many award-winning actors got their start. The Sherbourne is tagged for destruction, and this effort is designed to prevent that. Guests are by invitation only—at a thousand dollars a ticket—guests like Katharine Hepburn, Jackie O, Meryl Streep, and Elia Kazan just to name a few.

Merliee’s stars are Greg Farber, Dini Hawes (Greg’s real-life wife), and Marty Miller—each an Oscar winner and each at the top of his and her class of actors.

But problems beyond the scope of a dilapidated playhouse arise early in the story when Robert John (RJ) Romero appears. RJ was a promising actor when Greg, Dini, Marty, Merilee and RJ were all classmates at the Yale School of Drama where romances flourished like dandelions in spring. RJ, however, expected life to give him his opportunities—not to have to work for them. His thriving career took a tumble early on, and he never quit blaming his erstwhile classmates for his own failures.

RJ approaches Hoagy in an attempt to blackmail him with dirt on Merilee from an automobile accident resulting in the death of a man several decades earlier. Hoagy contacts his lawyer, who contacts a local fixer to resolve the problem and remove RJ from the scene.

Hoagy doesn’t go for this, and agrees to pay the blackmail. When the time comes for the meeting, Hoagy does not give the demanded amount, but a sum considerably lower. RJ is not pleased and now demands additional money.

In the meantime, Merilee has her own problems with the production and the playhouse. Greg is unable to provide the character needed for his lead role, Dini is showing signs of extreme illness, and Marty, although an excellent actor, is dirty and difficult to work with. Sabrina Meyer, the only new cast member, shows great promise.

As the date for the play approaches, RJ reemphasizes his demands and Hoagy searches for answers to the decades old incident. His research indicates that Merilee would probably not be held accountable, especially since the real guilty party was RJ not Merilee. But Hoagy knows the publicity would surely be the end of Merilee’s career.

RJ, wanting to ensure that his new demands are met, sends a message to Hoagy. He kills the pet rooster on the farm, indicating that other deaths could follow.

Not to be outdone by something as simply sinister as blackmail, Mother Nature throws in her own problems. On the day of the performance, a storm threatens to be the undoing of the show. The theater is woefully deteriorating, the roof has holes, and even with tarps secured, there is no guarantee that the rain and winds won’t cascade down onto both the stage and the illustrious audience, destroying the one opportunity to provide the money needed to save the theater.

During the first act, Hoagy and Lulu sit in the back of the theater, and are pleasantly surprised to see a good performance from all of the actors. And then the skies open up, and the deluge begins. The audience doesn’t care— they are there for a reason. During intermission, Hoagy and Lulu wander down into the bowels of the theater where the dressing rooms are filling with water. And Greg is found murdered, his body face down in six inches of water, and the back of his head bashed in.

The play does not continue, but the audience refuses a refund. The theater must be saved.

Enter police Lt. Carmine Tedone to investigate. And there is a wealth of suspects: the cast, the crew, and those on the outskirts of the performance such as RJ Ramone! And while Lt. Tedone investigates, Hoagy and Lulu set off following their own set of clues. Tedone and Hoagy do not work at odds with each other, yet even as they each pursue their own ends, body number two turns up. Sabrina Meyer is found dead in her hotel room, the result of a drug overdose.

Tedone and Hoagy and Lulu put their heads together and call all of the cast and crew together to re-enact the events during the intermission. It is at this point that the clues all fall into place and everything is made clear—the true perpetrator is uncovered.

Not one to spoil a good story ending, suffice to say that Handler has laid out all the clues for the reader, and the discovery of the guilty party is a satisfying ending.

This is a fun story, definitely worth the short time it will take to read the book. This is a keeper, and should sit on the library shelf next to all the other Hoagy and Lulu stories that one can find.