The Man Who Ate Too Much: The Life of James Beard 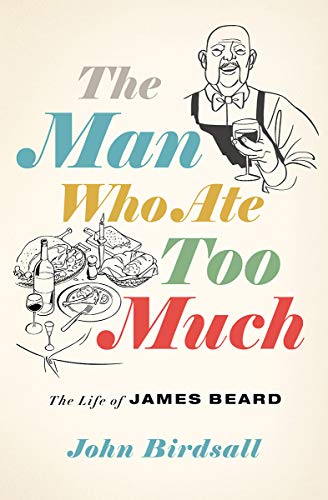 “Drinking was a group hobby . . . Food, its accoutrements, and above all the sensuous pleasures of eating formed the leitmotif of his life.”

On a picnic in Southwest France with Alice B. Toklas and company in tow, overlooking a spectacular vista and the house where Maurice Revell had lived, James Beard observed that Alice insisted on sitting with her back to the scenery. “I never face the view,” she tells him. “It takes my mind off eating.”

James Beard constantly fixed his mind on food, its accoutrements, and above all the sensuous pleasures of eating. The latter formed the leitmotif of his life. Born in Portland, Oregon in 1903, Beard grew up just when the industrialization of American food was getting underway.

He came to resist the dumbing down of food in numerous books, articles, and live demonstrations. Aghast at the insipidity of frozen and canned fare, he argued tirelessly for the importance of taste over convenience or speed. “It is shocking what the Coca-Cola age has done to the world!” he complained.

The “Dean of American Cookery,” as the New York Times dubbed him in 1954, was hard to miss. Not only was he tall, but he weighed in at around 350 pounds. Paradoxically, his physical size seemed to put people at ease. A less congenial paradox as he grew increasingly famous in America and abroad was the inability to reveal his true self, and his terror that the public would find out who he really was.

As John Birdsall reveals in The Man Who Ate Too Much: The Life of James Beard, the renowned cook was gay. Practically everyone in his intimate circle, whom he regarded as true family, were either lesbian or gay and the few friends “who weren’t queer he could trust with his secrets.”

Birdsall gives the reader an intimate view of gay life in America between 1950 and 1980. His knowledge of gay history and access to primary sources allows him to illustrate the camaraderie that expressed the “pleasure and the exuberance of intimate lives that they couldn’t otherwise reveal to the world.” An activist himself, Birdsall’s preferred adjective is “queer,” and what he does in convincing detail is show the reader just how much this demimonde of outcasts influenced American culture.

He tells of 1950s marriages of “understanding,” which understood the necessity for couples to “arrange their lives . . . around certain truths.” Beard’s parents had such a marriage. His emotionally distant father left him at an early age to be with a woman who actually loved him. His mother, whom Beard later understood was a lesbian, suffered from strictures that kept her from the love of her life. Still, she wanted a child, and had James at the late age of 36.

Beard’s mother cultivated in him a sensitivity to taste, a readiness to express himself, and “an unabashed regard for his own opinions.” His numerous books gradually amounted to a long bildungsroman about his burgeoning awareness of taste “as a force that anchored him in the world.” He likened his ability to recall a “taste memory” to having perfect pitch.

Taste memories abound in this biography—his mother’s boardinghouse and the white asparagus that she canned, the way she hauled 30-pound buckets of clams from the beach and made the most ethereal chowder, his many lessons learned from family chefs. Growing up a stranger to happiness, Beard didn’t have the sentimental attachment to a particular person’s cooking the way many people do. His attachments were to the taste sensation of razor clams, Dungeness crab, salmon, crawfish, muscles, and trout that he grew up with on the Oregon coast. These influences only grew with time.

Influential women made up the larger part of his friendships. And of course his increasing influence with the world of cooks, critics, wine merchants, and restauranteurs. But early on he bounced from one miserly publisher to another, never achieving the success he craved in terms of sales or reputation. One book faced the impossible task of trying to sell vegetables “when the dearest aspiration for most Americans was a grilled T-bone.”

By the age of 56 in 1953 he had written and was proud of several well-praised tomes, but hadn’t written the book that would express his vast “experiences and convictions” about food and eating.

That book would be The James Beard Cookbook released in 1959. While Alice B. Toklas had been his idol, he had surpassed her. The new food editor of the New York Times, Craig Claiborne—also gay—called Beard an American culinary master and gastronome “of international repute.” It is a final irony that the fat, reviled queer boy ultimately came to embody the most coveted prize in gastronomy—the James Beard Award.

Birdsall given an entre nous look at fabulous restaurants of the period—Le Pavilion, “21,” Jack’s in San Francisco, the London Chophouse in Detroit, the Pancake House in Portland “where the scrambled eggs were artistry.” He includes photographs of family, friends, and the famous, but the book’s large cast makes it hard to keep track of everyone.

Readers also have to contend with excessive travel itineraries and chapters that are arranged by years, leading to the inevitable problem of mere chronicling: and then . . . and then, rather than a deep dive into the subject’s interior and what given him meaning. Unintentionally hilarious sentences appear such as, “Helen planted a loquat tree and had another child.” Others seem on the nose: “Drinking was a group hobby.”

In 1956 Beard began to hold cooking seminars at his home on East 50th Street in New York. Standing in the center of a U-shaped counter and surrounded by ten students, his shyness and insecurity “melted away while he was teaching. He found his stage, the spotlight had been seeking for 30 years . . . A show that made everyone happy.”