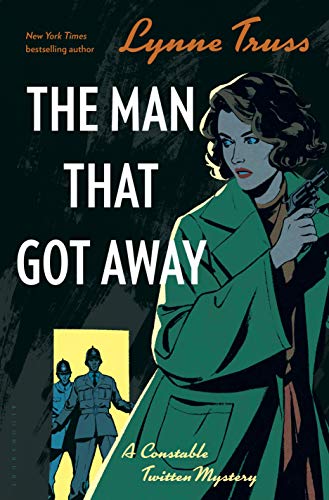 “The craft and care with which author Truss weaves her facts into a richly narrated but utterly hilarious tapestry is amazing. The reader may find himself wondering how she manages to keep her facts straight as she throws his own mental processes into such a delightful muddle.”

Welcome back to the Brighton Constabulary, where newly arrived Constable Peregrine Twitten is recovering from the discovery that Mrs. Groynes, the station charlady, is actually  “a criminal mastermind responsible for a massive network of underworld operators.”

No one else believes this, of course, for Twitten had the misfortune to participate in a stage show in which he was hypnotized and told he would think that very thought.

His insistence that the post-hypnotic suggestion had nothing to do with it may jeopardize his career.

“Being a police officer was more important to him than anything else; so here he was. He was determined to fit in. Just two days ago, he had been issued a brand new white helmet, the traditional, exotic headgear of the Brighton policeman. Putting it on for the first time had been quite an emotional moment.”

Soon, however, Twitten will have other things to worry about.

A young man is discovered in a deck chair, very deceased, his throat cut.

The young man is Peter Dupont, a junior clerk in Town Planning (Sewerage and Waterworks) who was romancing Deirdre Benson, daughter of Ma Benson, owner of the Black Cat saloon, a lady on whose bad side one would not wish to be. Peter was also gathering—for reasons known only to himself—a great deal of information on his boss, as well as the land on which the Black Cat is built, if that has anything to do with anything.

It always hurts when a person one knows, even slightly, is killed. Twitten does know Peter, very slightly. He’d seen him at the Maison du Wax and overheard a conversation that influences his investigation very seriously.

While Twitten’s hapless superior, Inspector Steines, is agog over discovering one of the young ladies hired as a Brighton Belle is his long-lost niece, and Sergeant Brunswick finally fulfils his ambition of going undercover, the constable finds himself alone in his attempts to solve Peter Dupont’s mystery.

In the course of his investigation, he’ll discover more than he wants to know about any number of things seemingly having nothing to do with this particular case: that a local nobleman is trying to sell gold bars to boardwalk tourists; the area where the Black Cat bar is located used to be the garden of Colchester House, with a hidden underground room; and Mrs. Groynes lost someone for whom she cared dearly to a gruesome and deadly con game.

He also discovers that if Peter’s investigation didn’t lead directly to his death, the things he discovered certainly caused someone to send some pretty deadly vibes in his direction.

More or less abandoned by his superiors, Twitten feels there’s only one thing to do and to his sheer embarrassment, he has to do it—he enlists Mrs. Groynes’ aid in luring the murderer into the open, where the two will discover how  a limping man in a doorman’s uniform, the true identities of the band hired to play at the Black Cat, Inspector Steines’ parents’ romance, and the novel Noblesse Oblige all fit into the case.

Based on the author’s British radio series, this second in the Constable Twitten novels once again takes the reader back to Brighton and 1957, shortly after the hilarious debacle of crime described in A Shot in the Dark.

In case there’s any doubt about the date, there are notable mentions of events occurring at the time.

For those missing the initial novel, members of the constabulary are re-introduced in enough detail for the uninitiated to immediately grasp their various identities. Twitten is still as earnest and pedantic, Inspector Steines just as dense, and Mrs. Groynes as crafty as ever. This episode, focusing on the notorious charlady-turned-criminal mastermind’s long-ago romance, may make her a little more human—or perhaps not.

What it does is add the ingredient of a lost romance to the mishmash of seemingly unrelated occurrences all jumbling together to solve the case of Peter Dupont’s death.

The characters in this story are more deadly and dangerous than those included previously—if that’s possible. The craft and care with which author Truss weaves her facts into a richly narrated but utterly hilarious tapestry is amazing. The reader may find himself wondering how she manages to keep her facts straight as she throws his own mental processes into such a delightful muddle.

Filled with British humor and slang, The Man That Got Away is hilarious and intriguing, with satire aforethought. Don’t overwork the little gray cells; simply read and enjoy!