A Man at Arms: A Novel 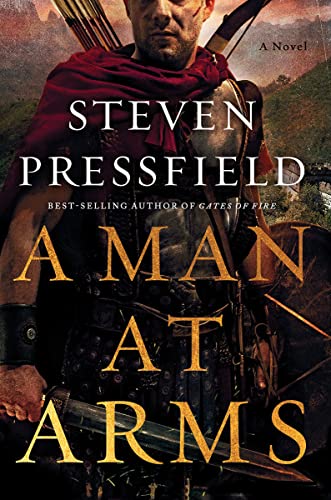 “grab a copy of this book and be transported back to the Roman Empire circa 55 CE . . .”

Steven Pressfield is back. The author of the bestselling novels of ancient Greece—Gates of Fire and Tides of War and the famous book on writing War of Art—turns his attention to ancient Rome in this page-turning new thriller.

Set in the two decades following the Crucifixion, the plot follows the quest of a Roman legionary turned mercenary, Telamon, in his assignment to hunt down the messenger carrying the Apostle Paul’s first letter to the new Christian church in the city of Corinth. Considered dangerous and subversive to the Roman authorities, intercepting the letter becomes a fixation for the Roman Tribune Marcus Severus Pertinax, who gives Telamon the job, promising him riches if he succeeds and crucifixion if he fails.

Mr. Pressfield introduces a mysterious plot as Telamon, a cynical and detached individual, becomes drawn into a complex web of faith, betrayal, friendship, and miracles as soon he finds the individual sought by the Romans. But he doesn’t immediately turn him into the Romans, and when Telamon begins to relate in some manner with the man and a mute child accompanying him, he experiences what could be described as a conversion and begins to question his purpose and loyalties. A relentless pursuit by the legion commanded Severus Pertinax continues through most of the narrative, culminating in an unexpected final showdown in the city of Corinth—not giving away too many plot twists—and Mr. Pressfield drops more than a few on the reader.

As with any good novel, the characters draw you into the plot, and this book has a complex set of misfits, each with their own goals, motivations, and backstory yhay Mr. Pressfield teases out through most of the book. There are few true heroes or villains, just a group of survivors trying to take advantage of a situation they didn’t create and can’t fully understand.

What makes Mr. Pressfield’s novels so compelling is the depth of his research and his remarkable ability to drop the reader into the middle of a scene from 2,000 years ago—the sights, smells, clash of swords, or the thrill of a desert pursuit are brought to the mind’s eye with a magnificent ability to bring, in this case, the first century Roman Empire to life.

The climax will leave the reader a bit stunned as Mr. Pressfield brings all the tension and plot machinations to an unexpected but satisfactory conclusion, leaving the reader happily exhausted.

If you are a fan of Mr. Pressfield’s previous works or enjoy great historical fiction, grab a copy of this book and be transported back to the Roman Empire circa 55 CE. You will soon smell the dust of the ancient Roman roads.