A Man Above Reproach 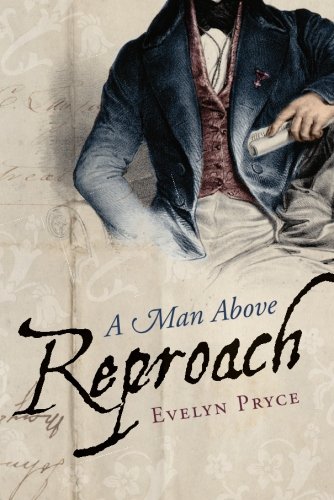 “ . . . the tale of what happens when a man considered above reproach by his peers does what he wants and not what’s expected of him . . .”

Elias Addison, Earl of Lennox, always does what’s expected of him. He might’ve wanted to stay at university and accept a professorship but when his father dies leaving massive debts, Elias determines to pay them and assure his little sister the debut she deserves. Why? Because it’s expected.

There’s also the question of marriage for himself but he’s certain it’ll happen soon enough . . . unfortunately.

Lately Elias has been having secretly rebellious thoughts, however.

“There were times he would have wished to have been born a stable boy, when his choices could be his own.”

When his mood becomes “black and his conversation no better . . . thinking constantly of the responsibility dumped into his lap,” best friend Nicholas, in an attempt to distract him, takes him to an establishment called the Sleeping Dove. Elias is hesitant to go. He’s long since questioned the actions of his peers’ behavior in such places:

“They let their estates run into ruin while they occupied themselves with . . . momentary satisfaction. They strained against the strict rules of society, which made no allowances for their appetites . . .”

Elias understands this but he also hates it and his own little rebellions seem petty in contract.

“Now that he was the duke, no one would tell him he was wrong. . . . Breaking little society rules was the only joy he had in recently memory.”

It is at the Sleeping Dove that he meets the woman called “the Bawdy Bluestocking” and his life is changed forever.

Josephine Grant is a woman on a mission. Left with only a small bookstore when her father dies, she supplies music at the Sleeping Dove in the evenings.

“Playing piano at the Dove was supposed to supplement her income but when she learned of the true horrors there, it had become something more . . . There were bigger dangers at the Dove beyond groping and drunken lewdness . . . it was a well-known fact if you slept at the Dove you were in peril.”

She now has a secret agenda, helping the girls of the Dove escape to better lives.

Elias is attracted to Josephine and immediately begins paying her unwanted attention.

“How much will buy your exclusive company for the evening?”
“I am sure that you have been informed that this is not an option.”
“I am not asking to share your bed,” he said curtly. “I am asking for the freedom to speak with you whenever I wish.”

And so it goes . . . Elias pursues, Josephine flees, pausing long enough for conversation now and then. Neither admits they are falling in love.

In a passage of self-realization, Elias recounts to friend Nic why he doesn’t care for Josephine, only to acknowledge those same reasons are exactly why he loves her:

“She does not shrink in conversation . . . she does not listen to reason . . . She belongs in Bedlam where she can’t cause trouble. Or maybe I do . . . I have thought of little else since I met her.”

When Elias discovers her bookshop and the book she has written condemning places like the Sleeping Dove, he’s in agreement with its sentiments but appalled that Josephine has published it under her own name.

“What Josephine was doing was both dangerous and imprudent. The book was . . a condemnation of the entire upper echelon . . . The wrong person would happen upon the book . . . Her bookstore would be in jeopardy for certain, her person as well . . .”

Now there’s more at stake than whether Elias can melt Josephine’s defenses. He has to save her as well as discover who she really is, for he’s learned she was once a part of that nobility she now condemns.

There are choices to be made and Elias makes them. Some of his decisions seem extreme, several absurd, but one is most definitely right because it comes from his heart . . .

This is a delightful Regency tale, full of that wonderful give-and-take dialogue expected in such a story. The characters of both Elias and Josephine are well delineated as seen by each other and by their peers. The sins and secrets of their society are pointed out and contrasted to the way both think and how each tries to solve them.

This is definitely a love story between two strongly opinionated people, but it’s also the tale of what happens when a man considered above reproach by his peers does what he wants and not what’s expected of him.