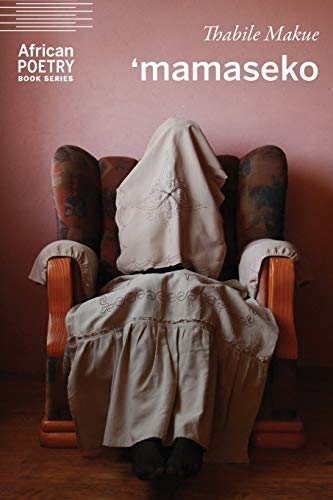 Thabile Makue’s sophomore collection, ‘mamaseko, explores intergenerational trauma through repetitive forms and turbulent language. The author’s focus on blood as both the root and the salve for violence is an ingenious metaphor employed throughout the book under numerous guises. Ultimately, though, these poems would thrive as a spoken-word performance more than they thrive upon the page.

A female speaker’s first period, women giving birth, wounds (physical and psychological), centuries of enslavement, Western medicine—these are a few of the many masks blood hides behind in ’mamaseko, titled for the author’s mother. It is through strong familial ties that blood becomes synonymous with fire, as Makue draws strong, thematic parallels between the destructive and rejuvenating powers of fire and the destructive and restorative nature of family. In “blood body,” Makue shows there are no barriers between blood, family, and violence:

teaches me that prayer

is surer this way

when you are empty

your blood is banished

your body of pain.”

Here, blood (family) is the source of bodily pain while prayer (coupled with fasting) becomes the salve. The pain inflicted by hunger is second to the pain endured by family members—indicated by the grandmother—when mental and physical abuse perpetuates over generations. Although the author makes it clear blood is to blame for this suffering, the lack of control the speakers have over their own identity is indicative of the difficulty of finding a solution.

Makue’s deliberate decision to forego all capitalization and punctuation echoes the erasure of identity and lack of control so evident in the language: the speakers and their stories are dwarfed by the loud overtones of violence and are left to occupy the small breaths that characterize each of Makue’s line breaks. The crux of ’mamaseko and of this battle with identity is epitomized by “close,” when the speaker says:

“our curse shall be broken

by the birth of children

who will name themselves.”

This idealized “naming” is in opposition to everything these speakers have brought to the foreground of ‘mamaseko thus far. If one could assign a singular name to or draw a simple conclusion about the traumas of an entire ancestral line, perhaps these issues wouldn’t have persisted in the first place. Yet the author knows this perspective is not only ludicrous but reductive. Makue effectively and poignantly asserts the importance of personal and familial identity as separate entities which grant certain freedoms to those who have the privilege of defining their identity outside the lines of trauma.

In the pursuit of relaying the complexities of abuse cycles within blood relationships, Makue unquestioningly honors this identity erasure. Unfortunately, she writes about this in a style detrimental to the intended impact. As in other poems, in “out of battle,” the author’s repetitive form journeys away from transformative toward inattentive:

“places boats where rivers were borders

Line breaks that follow natural breath groups (the typical subject-verb-object) lose inertia; coupled with constant lack of punctuation, flat verbs, and uninspired adjectives, the power of Makue’s subject matter is thwarted by forms that grow to be uninteresting over time.

There are, contrarily, wonderful moments where Makue’s writing diverges from what became the expected. In the section ’mele, Makue’s attempts at defining traits that make up specific body parts are compelling and smart in their exacting brevity. It is a much-needed departure from the established form of ’mamaseko. And in “mantsoe” (translated as “words”), an incredibly moving and melancholy poem, this act of “defining” continues. The author’s obsession with identity is never far away, but it is in times where form is challenged and changed that Makue’s writing shines.

As good writing is seldom something the reader expects to read or has read before, the author’s own repetition of form and language is ’mamaseko’s largest undoing. The notable successes of this collection lie in its ability to make the reader uncomfortable. Junctures where harrowing tension builds, becoming disruptive enough to cause unease, capture the spirit that the reader often longs for while decoding Makue’s intention.

A fair characterization is that these poems seem to be better suited for performance than for reading: they are jarringly graphic yet vaguely discernible. As Makue is already an established spoken-word poet, one knows instinctively how powerful these poems would sound in her acclaimed voice. The author’s talent is apparent–the true potential of her writing for the reader, not the listener, begs to be sharpened as it waits right under the surface of what she accomplishes with ’mamaseko.