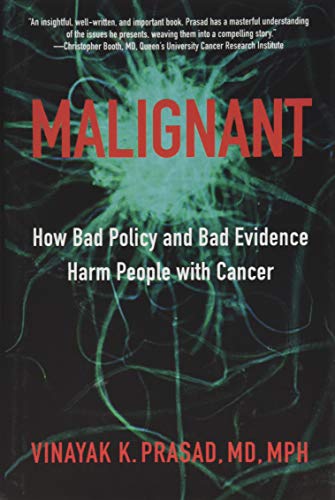 Dr. Vinayak K. Prasad adroitly explains how data and study design distort results that lack real-world applications, which is precisely the situation the world is facing now with the rush to develop a Covid-19 vaccine. Rushing to produce a result does not mean we will actually benefit. Further, anyone who is undergoing cancer treatment, though it may not keep you alive, Malignant: How Bad Policy and Bad Evidence Harm People with Cancer can help you live a better quality of life based on vetted proven treatments.

Learn how to understand statistical doublespeak and discern real outcomes based on patients representing a cross section of those with the same disease, not just the idealized ones. For example, surrogate end points, what are they and why should I care? A surrogate end point is a statistical destination, a measure used to target a desired interim outcome, such as tumor shrinkage. Though shrinking cancerous tumors is a response rate to treatment it is NOT a measure of whether patients lived longer or better. What matters to oncologists and drug companies is not the same as the patient desires. “The oncology pipeline has been called the hype-line for the way in which we let rhetoric outpace reality.”

Dr. Prasad easily reveals flagged terminology and treatments based on flimsy scientific review. Autologous bone marrow transplants were de rigeur in the 1980s for breast cancer treatment promoted as the miracle cure without a single randomized controlled study and later proven not more effective than other treatments. “The role of financial and professional conflict can be perverse.”

Dr. Larry Norton, who has written extensively on discerning the hype and unsubstantiated claims from wonder drugs remarked, “Fifty years from now we will look back on this period with horror and say how could this have happened.”

Dr. Prasad has the audacity to promote the idea that more clinical trials should measure outcomes (things that are measured) that actually matter to people with cancer. In order to do this study design needs to incorporate real-world patients and cost must be a factor. “Drug regulators need to raise not perpetually lower the bar for drug approvals>”

“We need patient advocates who are not conflicted because of financial incentives from those who profit from cancer patients.”

By changing some of our healthcare policies we can better serve patients instead of primarily being concerned with profits. Since taxpayers are actually providing the funding for drug development through Health and Human Services grants,” there need to be some checks in the system to ensure equitable prices, fair profits, AND a fair distribution of the profits to those who bore the greatest risk.”

Dr. Prasad cites myriad examples where the US government provides the funding and the taxpayers and patients did not reap the benefits. For example, palbocoiclib, a breast cancer drug is a lot like bevacizumab, a drug that improves a surrogate measure at the price of toxicity and costs the US healthcare system $12,000 per month without extending life significantly. This is an example of the US financial system encouraging “runners” in drug development only to produce profit not to benefit patients.

Lest you think Dr. Prasad’s genius is limited only to cancer treatments, he also addresses vaccines (Covid-19 anyone?). For example, cancer vaccines have had high rates of failure among ALL cancer therapies. In short, the Obama-era Cancer Moonshot has little chance of success, but it is still probably a better investment than the Trump Space Force.

Malignant reveals how skewing study findings and suppressing data lead to inaccurate impressions of therapeutic value, which earn FDA approval and insurance reimbursement for treatments of nebulous value and also for those which harm patients. That’s right, the public is not being given the actual information to make an informed decision because of profit motives in the pharmaceutical industry, which is less concerned about losing a few patients than continuing to earn 20% annual profits.

Malignant also takes on the financial conflict of interest issue with pharmaceuticals, and this is very current, given the US government director for the Covid-19 vaccine has refused to release his pharma stock or conflicts and is given a bye as a contractor. So, Moucef Slaoui, who will ultimately approve a national vaccine, which is 100% financed by the US government, will decide which company gets the contract—and he has worked for and owns thousands of shares of GlaxoSmithKline stock. No conflict there.

And if you are not uncomfortable yet, Dr. Prasad and his colleagues conducted a meta-analysis on financial conflicts of interest in cancer patient advocacy groups and found that 75% of the groups reported industry sponsorships and 24% did not specify whether they received industry funding or not (probably yes), and ONLY ONE ORGANIZATION SAID IT DID NOT RECEIVE INDUSTRY FUNDING.

Though reading the scientific jujitsu and profiteering in the cancer treatment industry, especially for pharma is shocking, Dr. Prasad does offer some workable policy changes to change this mess and those are worth a mint. Highly recommended as the read for this highly politicized scientific suppressing environment in which billions of dollars are made at the expense of US tax payers and consumers.