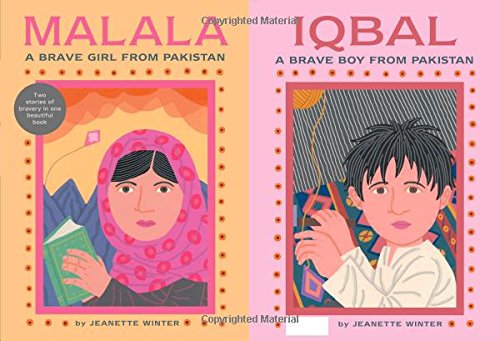 “an unusual opportunity to discuss with children the value of following one’s conscience and the need to stand up for justice, freedom, and equality.”

Known for her award-winning children’s books featuring activists working for peace and justice, Winter (Nasreen’s Secret School), turns her clear eye to the valiant efforts of two children who spoke out against a society that deprived young people of their right to an education (Malala Yousafzai) or the right to be protected from exploitation (Iqbal Masih). Since the children faced violent consequences—Malala was shot, while Iqbal was murdered—the author/illustrator took an unusual risk with this book intended for a young audience.

As with her other works, Winter offers spare text, simple illustrations, and a hopeful tone. For this book, she adds a pleasingly creative format: The reader can choose one story and then flip the book over to read the other. She introduces each child with a one-page note providing the essential context for his or her story, and follows that with the same quote from Rabindranath Tagore, the Bengali writer and educator who won the Nobel Prize for Literature in 1913: “Let us not pray to be sheltered from dangers, but to be fearless when facing them.”

Malala’s account will likely be more familiar to readers. Despite the Taliban’s efforts to prevent girls from attending school, Malala and her classmates rebel and keep going. To reduce their risks, the girls begin to travel to and from school in a van, but even then they are not safe. One day, a Taliban fighter stops the van and asks, “Who is Malala? Speak up, otherwise I will shoot you all.” In the author’s note, we learn the bullet went through Malala’s head and neck to her shoulder.

After the van takes her to the local hospital, she is transferred to other sites, where doctors succeed in saving her life. On her 16th birthday, Malala, nominated for the Nobel Peace Prize in 2013, tells an audience of world leaders: “They thought that bullets would silence us, but they failed . . . One child, one teacher, one book, one pen, can change the world.”

Between the two stories is a center spread showing each child on opposite sides, with a kite, symbolic of freedom, soaring toward the other. With eloquent symmetry, Malala, dressed in her pink and coral shalwar kameez, stands on a gray mountain peak and holds onto her kite, while Iqbal, depicted in a ghostly shade of gray, stands on a pink and coral peak and releases his kite. In the background, a golden crescent moon and rounded stars shine in a dusky purple sky.

Iqbal, we learn, loses his freedom at the age of four, when his destitute parents borrow $12 from a carpet factory owner. The gruff owner tells the bewildered boy, shown holding a coral and purple kite, “No kites here!” and then drags him inside the dark factory and chains the child to a loom.

Trudging home one night, 10-year-old Iqbal sees a notice announcing a meeting about Peshgi, the loans that hold children in bondage. There, he learns that Peshgi has been outlawed and all loans forgiven. He rushes to the factory and shouts, “You are free! We are free!”

Not only does Iqbal head to school, he keeps spreading the news of freedom to other bonded children. Two years later, a bullet ends the brave boy’s life.

Showing an astute awareness that the story of Iqbal’s brief life might well have dismayed young readers, Winter has wisely paired it with the more uplifting one of Malala. In doing so, she provides adults with an unusual opportunity to discuss with children the value of following one’s conscience and the need to stand up for justice, freedom, and equality.