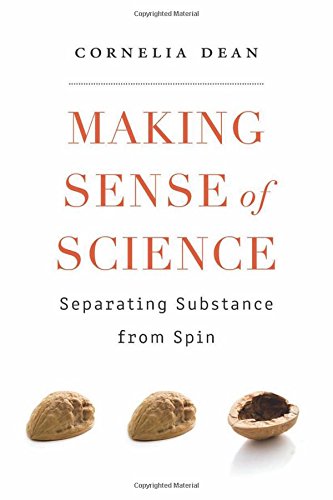 “If everybody always lies to you, the consequence is not that you believe the lies, but rather that nobody believes anything any longer.”—Hanna Arendt

It should be no surprise that journalists write well, but they also tend to be shallow, and often do not have what it takes to write longer, thoughtful, book-length works. In Making Sense of Science Dean shows some of the same behaviors.

Dean can finely craft sentences, making it easy for this reviewer to share quotable quotes. For example, “With rare exceptions, scientists and engineers are absent from the nation’s legislatures, city councils, or other elective offices. In effect, they turn the microphones over to those who are unqualified to speak. [To the consequence that] whoever has the most money, the juiciest allegation, or the most outrageous claim speaks with the loudest voice.”

Dean refers to surveys that show that only one quarter of Americans are science literate. And from this, Dean observes, “We are remarkably ready to accept utter nonsense.” Dean blames the American educational system in part, “And while widespread ignorance is bad, what is worse in a democracy is the positive embrace of ignorance we see in some political circles.”

Dean then offers a detailed study of bias, that is, patterns of shortcuts in thinking that lead to making mistakes, for example, confusing cause and effect. The problem with her analysis is that there are an infinite number of ways to get things wrong, and Dean bravely lists as many ways as she can find, in all their variety. She provides so many examples of human bias that readers can easily become numbed and miss her point.

And the conclusions she does reach raise more questions than they resolve. For example, when science is ongoing, there is a good chance that what is reported true one day may be reported as flawed research soon after. For this, she blames the scientist though this may not be the fault of the scientist, the science, or the reporter. In this, Dean reveals her own biases by providing more examples of why to doubt than trust science.

The second chapter of Making Sense of Science addresses science’s methodology and foundation on experiment, observation, and skepticism. Dean provides an overview the thoughts of two preeminent philosophers of science, Thomas Kuhn and Karl Popper.

Dean goes on to identify flaws in science methodology including problems with peer review, and weaknesses in models and prediction. Dean claims that science is, without any doubt, “full of error and even, at times, fraud.” The issues she raises can certainly be used to discount science, if all one wants to do is find reasons to discount science one already disagrees with. Since her complaints are neither compelling nor fatal, she walks her claim back, “Still, compared to many other fields of human endeavor, research is relatively free of misconduct.”

Dean recognizes that reporters have flaws, too. “For one thing, in general journalists are as ignorant as anyone else, and we to our share of irrational thinking.” Though on the other hand she notes that there are specific courses that train journalists in science and assessing science.

Reporters also have biases. Journalists do not seek truth so much as reporting that gets the approval of sponsors, whether their “sponsors” are owners, advertisers, subscribers or individuals who purchase (or more likely “click”) on the spur of the moment. Dean provides is no in depth analysis of the influence of money on reporting, except to note the main stream news’ (MSN) business model is broken. There is no description of the “thing” that has replaced MSN as if the author were living in a world without Fox News and “fake news.”

Dean notes characteristics of journalists. One is that they are natural skeptics, and “responsible journalists regard scientists and engineers with the same skepticism they bring to other news sources.” Another characteristic is that journalists want to be fair to all sides even if one side is an “outlier,” and to show of objectivity will never accuse sources of lying.

Journalists also write to a deadline, so they want quick and simple answers. Given various pressures journalists will also make sweeping claims even when such claims are unwarranted. Dean seems proud of this, stating “some stories are too good to check.” The implication is the there is little or no downside to the journalist for not fact checking. Dean however does not look at the line (if there is one) between not-fact-checking and making things up.

Dean recognizes the values of scientists and journalists do not always align, saying, “Scientists subject their work to peer review. They do not understand why journalists do not take a similar approach.” She claims scientists often have a false view of the purpose of journalism, “many scientists believe journalists who specialize in science ought to be advocates for science.”

To be fair, if Making Sense of Science were to be an actual debate between journalists and scientists, or better, on the debate between politicians and scientists through journalism, then Dean (one hopes) would move on to address flaws in the methods of conducting reporting on politics and on political debate, with perhaps some self-reflection on the moral purpose of journalism. Making Sense of Science however is not that book—a reviewer has to review the book one has, and not the book one wishes one had.

After these significant points on the characteristics of scientists and journalists, Dean’s focus moves on to medicine. She offers a litany of complaints against medical institutions and against doctors. Dean writes, don’t trust your doctor, do your own research, and don’t vaccinate your children. She believes that every doctor orders unnecessary medical tests to profit from insurance. She also offers opinions on diet, and contradictorily is both pro-GMO and pro-organic. In a fashion reminiscent conducting a PowerPoint presentation, her section on diet is complete with bullet points, proclaiming:

Dean next provides a chapter covering the intersection of science and government policy, pointing out that less then 10% of the 114th Congress had a degree in science or engineering. She then informs readers that government policy primarily depends on values not facts. “People think the climate question is one science can answer. But in the larger sense, the answer depends on whether you think people living today have obligations to leave Earth more or less intact for generations after us. That is not a question science can answer.”

Did Dean just claim that members of Congress use climate change denial as pretense to get away with continued destruction of the environment?

Alas, she does not follow up. There’s more to Making Sense of Science but this reviewer has read enough to form an opinion and write a review. The reason this reviewer had picked this book was the initial hope that Making Sense of Science would cover the politics of reporting on science and climate change. Though there is some material on this (for example, the average local weatherman is unable to recognize the difference between weather and climate), there is not enough on the topic to overcome Making Sense of Science’s shortcomings—other than perversely pointing out how human reporters are and how screwed up typical journalism is.

There are endnotes, though not extensive enough to address every assertion made. The index appears thin; there are no entries for bias, truth, values, ethics, though these words bear significant weight on the author’s arguments.