Making History: The Storytellers Who Shaped the Past 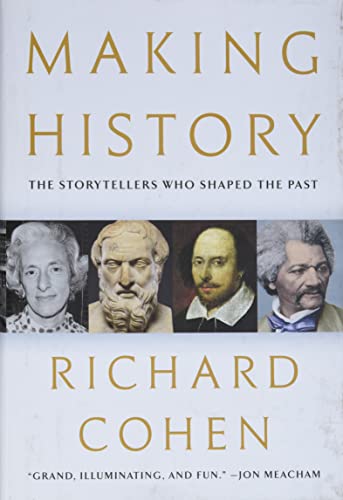 “that rare book that can simultaneously be enjoyed by anyone interested in the field of history, as well as being an excellent text for any college course on historiography.”

Author Richard Cohen has achieved the near impossible: writing an engaging, educational, and even entertaining book about the typically mundane topic of historiography. By carefully blending the study of numerous key players in the development of history as an academic subject worthy of respect, readers are led on a marvelous journey of nearly 4,000 years of trying to understand the key questions of historical study. Is there such a thing as unbiased history? Can there truly be an accurate picture of what happened in the past? And most of all, why study history at all?

Beginning with Thucydides and Herodotus, the author dives into not only the traditional masters of history, including Polybus, Gibbon, and Von Ranke, but he wanders down to some very non-traditional purveyors of history, especially examining the role of nonfiction works such as Tolstoy’s War and Peace and even Shakespeare’s plays to examine how they have influenced how historical events are viewed. The notion of 16th or 18th century pop culture, as it were, influencing our current view of history is eye-opening, but when he extends these thoughts to look at the influence of documentary maker Ken Burns and his highly popular television series on the Civil War, World War II, and other topics. the reader has a different view of how historical topics can be made into popular and even commercially successful ventures.

But the author does not skimp on his treatment of history as an academic subject, either, devoting significant chapters to the emergence of history as a serious field of study with its own rules of evidence, as well as gradually accepted methods for conducting research, drawing inferences and conclusions, and attempting to understand historical biases and the occasional subordination of history to serve political or personal ends.

The chapter on the Annales school of thought on history, which played a major part in expanding historical study to the entire realm of the human condition and began the integration of topics such as psychology, geography, and any number of other fields into the writing of history is particularly key in understanding the gradual broadening of history in the late 19th and early 20th centuries to cover any number of new topics that were traditionally neglected by historians.

The author does not shy away from controversy, either, devoting another chapter to the evolving way the American Civil War has been viewed as the key event in American history and yet other chapters to casting a critical eye on such luminaries as Winston Churchill, Ulysses S. Grant, and Henry Kissinger’s attempts to chronicle their lives and times through both their memoirs and attempts to write history. He also examines some of the overlooked characters and topics in the field of history, surveying the emerging role of women and minority historians in diving into topics or viewpoints of major events from a completely different perspective, and emerging as significant contributors to the development of historiography.

Finally, the author examines how history has often been blatantly manipulated to serve political purposes, most notably in Communist Russia and China during the 20th century. The outright lies and fraud perpetrated by the Communist regimes, especially during Stalin’s rule, should serve as a stark reminder that history can be directed to serve a corrupt regime’s purpose in any number of ways.

There is virtually no historical topic that escapes Cohen’s sharp gaze and experience as a bestselling publishing director and author. The narrative flows very seamlessly from chapter to chapter, clearly showing how the life experiences of some of history’s greatest chroniclers affected their writing and subsequently, our understanding of the past. Written in an academically sound manner but with a fair amount of wit to keep myriad topics from becoming too dry, it is that rare book that can simultaneously be enjoyed by anyone interested in the field of history, as well as being an excellent text for a college course on historiography.