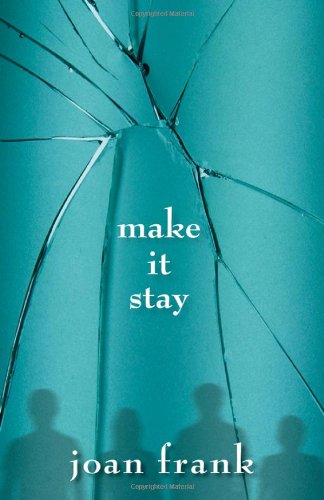 “All told, Joan Frank has not disgraced herself by any means, nor has she created anything to enhance her very good reputation. This is a good enough read that will appeal to its target market.”

Joan Frank has won several major literary awards and comes with a glowing reputation. Make It Stay does little to overturn any of the good things said about the author, and yet “treading water” is a phrase that comes to mind.

Set in Northern California, the story revolves around the narrator, Rachel, and her relationship with her Scottish husband Neil, and their friends Mike and Tilda.

At its base Make It Stay is a reasonable representation of some of the difficulties involved in contemporary relationships for those of a certain age. And age is a key concept here. This is not a story about nubile young waifs searching for love and sex. It’s an account of the way time changes perceptions, and how age and shared experience affects the way we interact with one another.

Neil and Mike have been friends for ages, and we hear about the development of their friendship as the story progresses. Though they’re from different social strata, as well as different parts of the world, the two men have a bond that carries them through good times and bad. Their wives, Rachel and Tilda, are even more disparate and can in no way be described as friends. In fact it’s the ongoing difficulties that Rachel has with Tilda that drives the narrative along.

Rachel is a middle class woman with very middle class views about the way one should and should not behave. She is a product of the seventies—the socially acceptable, educated, middle-American seventies, rather than the anarchic fringe. As such she really has a hard time with Tilda’s working class, biker chick attitudes and behaviors. This conflict is made more difficult by Neil’s relationship with Mike and, by extension, Tilda.

If this sounds a little convoluted, worry not. Frank’s prose style is effortless and convincing enough to easily navigate the ins and outs of the various connections.

What’s missing is the extra 10% magic that can make or break a novel.

The story is interesting, the characters are acceptable, the intellectual position is recognizable, but at the end you’re left wanting. That’s not to say that the story is left unresolved, or even poorly resolved. It’s just not enough. . . .

In that respect, perhaps Frank is striking close to the bone. Perhaps it’s just this sense of not enough, of unfulfilled promises, of compromise that she’s trying to address. But if that’s the case then she doesn’t quite go far enough either.

All told, Joan Frank has not disgraced herself by any means, nor has she created anything to enhance her very good reputation. This is a good enough read that will appeal to its target market. It’s almost as if she has developed a formula that works well and appeals to the sort of reader she wants to target.

But really, Make It Stay is too light to be considered much more than a decent holiday read. It’s not bad, nor is it great.