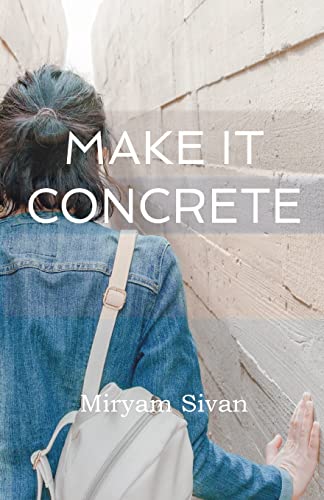 “Only when Isabel finally learns the truth about her mother’s past will she be able to . . . move forward with her own life. It is a conclusion that brings home the multigenerational effect of trauma and the ways it can be overcome.”

Make It Concrete explores the ways in which our histories, whether personal, familial, communal, or national, cast a long spell over the life choices we make and the way we experience the world. Set mostly in Israel, with forays into Prague and New York, the novel portrays a woman caught between the horrors of history and the reality of the present, in which Jews no longer fear the threat of exile and homelessness.

The novel’s author, Miriam Sivan, teaches English Literature at the International School at Haifa University. Her volume of short stories, SNAFU and Other Stories, came out in 2014, and like that collection, the novel deals with the way expats structure their lives in order to bridge the gap between cultures, languages, and historical epochs.

Isabel Toledo, the novel’s 46-year-old protagonist, is divorced with two older daughters and a young son. An independent spirit, she juggles deftly between Emanuel, her “official” boyfriend, and Zakhi, her young lover, even as she embarks on romantic trysts with other men.

Yet despite the relative ease of her existence, Isabel’s identity is defined by the fact that she is descended from two lineages seeped in trauma. Her father’s family traces its origins back to the Sephardic Jewish community expelled from Spain in 1492. Her mother, Suri, is a Polish Holocaust survivor who spent the war years in Siberia doing whatever it took to care for her younger siblings. It is a legacy that has shaped Isabel’s identity and directed the course of her life.

After visiting a concentration camp at the age of 18, Isabel makes two weighty resolutions: She would immigrate to Israel and devote her life to preserving the memory of the victims. True to her vow, she became a ghostwriter, dedicating her craft to telling the stories of survivors. But now, having written 14 memoirs in 20 years, she is emotionally exhausted, her psyche is overrun with troubling words and images of Jewish history.

It is a project on the life story of a Greek Jew, who, like her father, is of Sephardic ancestry, that truly unnerves her. “For twenty years now Isabel had plunged into emotional pits and used specific names and cartographies to write her way out. But now she felt lost in the there, the here, in both places, in neither place. She was way off the path. Had gone astray. Because of Jaim Benjamin’s story. Because he tossed her from one lebensraum to another, 450 years apart.”|

As if she herself were a survivor, barking dogs bring on associations of concentration camps. When asked by a clerk to hand over documents, she experiences a panic attack. While on a work trip to Prague, the horrors of the past permeate her consciousness.  “But it’s not then,” she chides herself. “Ghetto. Gestapo. Transports,” Isabel spoke out loud into the empty alley. “I am here now. Cell phones. High speed travel. Internet.”

At the heart of Isabel’s distress is the gaping hole in her own family history. Her mother refuses to reveal or discuss her own experience of the Holocaust, and Isabel can only imagine the worst. Even as she bears witness to the stories of strangers, she yearns to uncover her mother’s narrative.

“Suri named me Isabel, after Bella, her mother, who died naked and trembling in a freshly dug pit in a Ukrainian forest clearing. . . . Isabel scrolled down to a new page. Because of the lump in her throat, because of Suri’s painful silence and Dave’s loud ire, she would write Bella’s story . . . she would connect the dots and pieces and watch a story emerge.”

The unfinished business of the past affects Isabel’s love life as well. When Emanuel pressures her to marry him, she is unable to make a commitment. “She was so sorry to wound him. But claustrophobia came calling when she pictured Emanuel, or any man, sharing her bed every night, being in the kitchen every morning, in the living room every evening. Maybe she was . . . making a big mistake. But that’s who she was.”

Only when Isabel finally learns the truth about her mother’s past will she be able to put history aside and move forward with her own life. It is a conclusion that brings home the multigenerational effect of trauma and the ways it can be overcome.