Make It In America: The Case for Re-Inventing the Economy 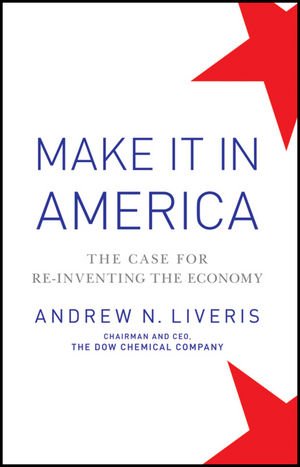 Basic manufacturing—however that is now defined—has fallen on hard times in the United States. Much of our manufacturing base has either been neglected, subject to outsourcing, or simply taken over by other countries—especially those who are classified as emerging economies. Further evidence of this is the perception of the conventional wisdom, which is that the U.S. is now in the post industrial age and are what can be classified as a service economy.

To counteract the prevailing wisdom, author Andrew Liveris argues that it is crucial to our global competitiveness that we rebuild the manufacturing sector in the United States because at the minimum there is a job multiplier and “job ripple” effect. Mr. Liveris notes that, based upon data provided by the Manufacturing Institute, “every dollar in final sales of manufactured products supports $1.40 in output from other sectors of the economy,” whereas the figure for the service sector of the U.S. economy is only $.71 for every dollar.

Mr. Liveris posits other criteria that contribute to the importance of re-invigorating the manufacturing sector in the United States. The first has to do with, as President Obama noted in the 1.25.2011 State of the Union address, the need to reinvigorate the process of innovation in our society. Mr. Liveris agrees with this but recommends that the manufacturing component of this process of innovation must be located in close proximity geographically to manufacturing centers within the United States. In the recent past, ideas have been created in the U.S. but manufactured elsewhere owing to better incentives provided by our national economic competitors.

The Liveris argument also stresses the need to improve our infrastructure as well as develop a coordinated National Economic Framework where government is an integral player in the process along with business. Government, Mr. Liveris suggests, must provide competitive incentives for manufacturing startups and other businesses to remain within the U.S. by offering permanent and scaled tax incentives so that manufacturing organizations can plan appropriately beyond the short term incentives and tax credits that are provided at this point in our economic history. Finally Mr. Liveris argues government, must not act, “as an overzealous regulator, but as a thoughtful partner to thoughtful business—in a shared effort to strengthen our economy.”

Mr. Liveris’s approach to the creation of a National Economic Framework has two phases; i.e.; he argues for policies that have both an immediate and longer-term impact. Those policies with an immediate impact include: harmonizing and simplifying rules, enacting performance standard regulations, accelerating and making more permanent the business permitting process, and benchmarking our regulations against those of our main competitors to provide a more fertile field for redeveloping and then maintaining our manufacturing base with globally competitive and innovative products.

Liveris’s recommendations of a longer-term nature (the end game) focus on improving our workforce competitiveness by revitalizing education in all areas: from K–12, in the post secondary sphere, and in the workplace itself through innovative, competency-based job training efforts. Taking the argument a step further, Mr. Liveris supports the need to create those products reflective of 21st Century competitiveness with a particular emphasis on “green” jobs that help to deflect the effects of climate change by efficiently using energy, and creating new sources of energy, and most importantly revenue that are not now even on the horizon.

Though Mr. Liveris’s argument is compelling and even novel, where his approach sometimes loses its effectiveness is when his passion is not necessarily reflected in the vitality of his writing. At times the read can be rather dry, fit for only those with a penchant for business writing.

His style often loses its appeal as a broad propaganda piece that could be used more effectively to create a groundswell of popular and populist opinion for the important ideas that Mr. Liveris is advocating with respect to the need to protect and project U.S. competitiveness in the face of competitors in the emerging economies, as well as developed economies such as Germany. The latter point is important because Germany, with a similar development pattern to the United States has created a climate of innovation where their exports are extremely competitive in the global marketplace. They achieved this competitiveness, as Mr. Liveris notes, by offering incentives to innovative businesses within Germany.

Despite the issues of style, this book serves as a clarion call for rebuilding the United States’ manufacturing base. He argues this can and must be done by a novel partnership between government and business. Further, this partnership must provide long term incentives and opportunities to increase innovation in the U.S. manufacturing sector that until recently was given up for a loss.

This book is a must read for policy makers and forecasters of global economic trends.