Major Labels: A History of Popular Music in Seven Genres 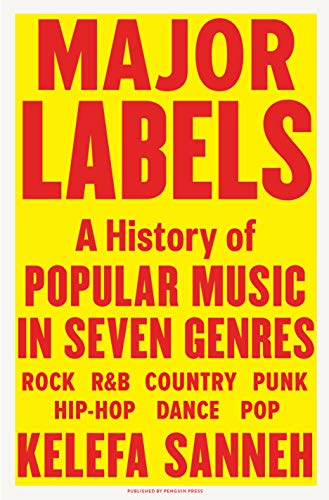 “If there’s one book about music that deserves to be read cover to cover this year it’s Kelefa Sanneh’s Major Labels. It’s bound to be a contemporary classic.”

At 476 pages, with a bodacious single-spaced index and five densely packed chapters, plus an intriguing introduction, Major Labels can look and feel intimidating. As both music and cultural criticism, and also as an autobiography, it’s heavy in more ways than one. But not to worry.

Kelefa Sanneh’s new book is user friendly. For years, he’s been writing brilliantly about music for The New York Times and The New Yorker, honing his skills and acquiring a huge body of information that he draws on.

What makes his book inviting, for one thing, is that almost everywhere one turns in Major Labels the author himself— the fellow who strikes up the band and keeps the records spinning—reveals himself, makes himself vulnerable, and proves himself to be a trustworthy guide through the labyrinth of sounds he explores.

Some of the material is familiar. Most of the performers are well-known, though there are pleasant surprises, including the author’s enthusiasm for Paul Simon and his album Graceland, which he calls “an Afropop classic” that he listened to when he was growing up. His mother, who was from South Africa, and his father who was from the Gambia, were also big Simon fans.

In his opening salvo, Sanneh writes, “When my father was lying in a hospital bed in New Haven, Connecticut, struck down by a sudden illness, and the doctors and nurses were searching for any sign that he was still alive, my mother decided that he needed a soundtrack.” A wise move.

Soundtracks are Sanneh’s specialty, his lifeblood, and his raison d’etre. Music plays in his head day and night. His enthusiasm rarely wanes.

With regard to his father’s hospital bed, he explains, “One of the albums we put into heavy rotation was Clychau Dibon, a shimmering collaboration from 2013 between Catrin Finch, a Welsh harpist, and Seckou Keita, a kora player from the Casamance region of Senegal, in West Africa—not far from where my father had grown up, in Gambia.” He gets the geography right, along with the dates and the names.

Sanneh’s reach is global and local, personal and political, scholarly and lyrical. His book is warmly encyclopedic. In the chapter titled “Country” he explains how the “folk” music from the Appalachian Mountains and elsewhere in rural America moved from the regional to the national stage and how “traditional instruments like the banjo and the pedal steel guitar tend to fall in and out of favor.”

A reader can begin at the beginning and go clear through to the end, or start almost anywhere, with chapter four, for example, which is titled “Punk,” and that’s at the heart and the soul of this book, which begins about 1970 and moves relentlessly toward the present day.

“I was a punk—whatever that meant,” Sanneh writes at the start of the chapter that includes a lot of information about the Sex Pistols, and the politics of punk that turned on occasion to white supremacy and racism.

The author wisely doesn’t delve far into the sixties. It’s not his era and there have already been tons written about it. There’s precious little here about the Beatles or Bob Dylan, though Sanneh offers useful tidbits. Like the fact that “It was Alan Freed, a white Cleveland disc jockey who popularized the term rock ’n’ roll in the fifties, to describe the music he was playing.”

Anyone who lived through that decade and listened to the Everley Brothers, Carl Perkins, and Fats Domino and others knows about Alan Freed. But generations who came after the first disciples of rock, need some history, need to know that Freed was white and that “most of what he was playing was R & B.”

Sanneh creates categories and breaks them down, explores labels and collapses them, looks at music on the margins and in the mainstream.

He writes about the influential DJs, the trend-setting music critics who came before him—Ellen Willis, Dave Marsh, Tom Smucker, and Paul Hemphill—and about the major publications like Rolling Stone magazine that promoted the likes of The Stones, Grand Funk Railroad, and Paul Simon.

Over the past 50 years, the music scene in the US and in England has become so complex and complicated that Major Labels is absolutely essential reading as a road map. Indeed Sanneh touches on acid rock, punk rock, cock rock, rap rock, alternative rock, progressive rock, soft rock, hard rock, and downer rock.

Major Labels doesn’t cover folk, classical, jazz, or Latin. But it goes deeply into hip-hop, country, R & B, and dance music with intriguing section titles such as “Make Country County Again,” “Hipsters Are Everywhere,” and “Ambition and Hunger.”

Sanneh gets the contradictions, never loses sight of them, and nails them incisively. “Popular music,” he writes, “will necessarily be divisive, bringing us together while also pushing us apart.” It shows that pattern in his own family

If there’s one book about music that deserves to be read cover to cover this year it’s Kelefa Sanneh’s Major Labels. It’s bound to be a contemporary classic.

Jonah Raskin is the author of the novel Beat Blues, San Francisco, 1955.