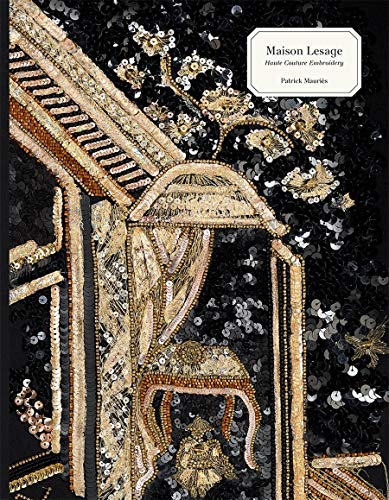 From the title the prospective reader will expect a history and love letter to the ateliers of Maison Lesage. The fact is that Patrick Mauriès has offered so much more than just the story of Lesage as Maison Lesage: Haute Couture Embroidery; he also also provides the reader with a history and celebration of French fashion, the legacy of the Lesage family, an explanation/glossary of the unfathomable techniques used in their inconceivable output, and finally a  visual feast of the miracles they have and continue to perform during their fabled existence.

Mauriès weaves all the aspects of the family and the business into an amazing saga of survival, innovation, determination, relationships and most of all talent.

If there is one shortcoming, impossible as it may be, it would be that the reader is unable to actually touch what is photographed. The examples are almost inconceivably and seemingly impossible to have been executed, and yet Lesage has continued on this path for over a century. The photography is top of the line, but seeing it in the flesh and being able to touch it would have been the ultimate experience while learning about the ateliers and the legacy.

There is a story to tell that involves the modus operandi of all the those who led the company and how they dealt with adverse times as well as their heydays. Their endless innovations, invention, and foresight cannot be discounted or diminished in the telling of the long life that Maison Lesage has enjoyed and how they have managed to remain the premier embroiderers within the fashion orbit and not just at the haute couture level.

Consider Maison Lesage: Haute Couture Embroidery a rare opportunity for the most avid of fashionphiles as well as for the neophytes to understand what is behind the name and the reputation of this generational and legendary business. The name Lesage conjures greatness coupled with its unrivaled abilities, and now you can read and learn about how and why they have acquired this level of recognition.