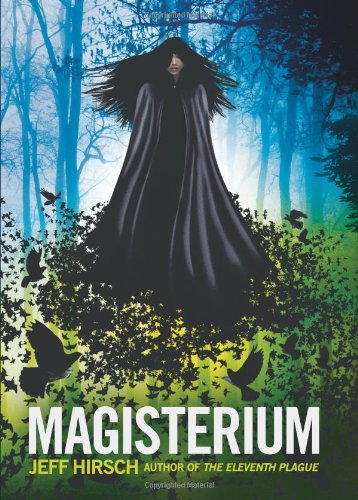 “It’s like Alice in Wonderland meets Jason Bourne in Fallujah.”

Jeff Hirsch begins his story with an intriguing concept. Over 100 years ago some sort of giant explosion separated Earth into two segments: the technologically advanced Colloquium and the mysterious Magisterium. The separation is called the Rift.

Strangely, the story never explains how this event happened or why, an omission that will bother some readers throughout the entire book.

Most citizens of the Colloquium believe the Magisterium is a wasteland bereft of life. After all, online satellite photos show nothing but darkness and desolation across the Rift. A few citizens believe a government conspiracy keeps the truth buried, that the Magisterium is filled with mutants and other oddities.

Nothing but two miles of forest and a string of red lights separates the two worlds, yet no one seems interested enough to cross the invisible line and explore the unknown.

Enter 16-year-old Glenn Morgan and her only friend, Kevin. She follows the standard line of thinking about the Magisterium, while Kevin believes the conspiracy theories insisting it’s filled with monsters and witchcraft. Glenn’s mother disappeared ten years ago and her scientist father spends all his time working on a secret project in his workshop. It seems nothing but her beloved cat binds Glenn to her life in the Colloquium.

Glenn plans to attend the space academy and travel to an Earthlike galaxy so far away that no one ever returns.

Glenn’s father is arrested when his work comes to the attention of Colloquium authorities. At the last moment, he clamps a thick metal bracelet on Glenn’s wrist. He tells Glenn that her mother had to cross the Rift and somehow got trapped on the other side. He planned for the two of them to enter the Magisterium and find her.

Now the authorities are after both Glenn and Kevin. As seems inevitable from the first page, they cross into the Rift and learn the Colloquium has been lying. Again, predictable. People do live in the Magisterium. The setting is strongly reminiscent of medieval England: tiny villages; suspicious, roughly clad people; and a crowded smoky inn with a dirty mattress in the rented room with a meat stew on the table that could have come straight from Chaucer.

The bracelet is intended to keep Glenn grounded in her reality, for the Magisterium is a strange and magical place with its own reality. When Glenn removes the bracelet, she discovers her own Affinity—magical ability —is very powerful and allows her to do things she could never have imagined.

At times, the story seems to vacillate, uncertain if it’s meant to be a middle-grade or young adult novel. The cat turns into a giant warlike creature. A beautiful swan morphs into a woman. Dancing lights reveal themselves to be fairy-like beings. Middle grade elements. Kevin is shot and several people die horrible deaths. Giant trebuchets filled with explosives destroy a village. YA for sure. It’s like Alice in Wonderland meets Jason Bourne in Fallujah.

Unfortunately, the story’s promise is never fully realized. Glenn is not an especially engaging main character, although Kevin is more so. At times, the plot is slow and murky, the characters moving from place to place seemingly with little purpose. Other times, especially in the last third of the book, the plot is fast, over violent, yet still underdeveloped.

The most imaginative element is the Magistra: who she is and why she’s there. As depicted on the book’s cover, thousands of blackbirds form her body and swirling black gown. Her power seems limitless.

The final pages reveal an unexpected and interesting twist, perhaps enough to sustain the reader through earlier chapters. The conflicting realities of technology at war with magic pose some thought provoking questions. For example, can evil done for a good cause ever be justified? And given unlimited power, can people maintain their humanity?