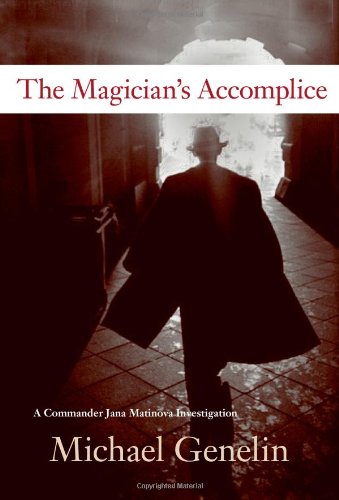 It’s a case of being at the wrong place at the wrong time—or is it? Michael Genelin’s third Commander Jana Matinova mystery novel begins by introducing the reader to a charming, if somewhat opportunistic, starving student. No sooner does the reader take a liking to the young chap, than poof, he’s gone. Not in the magical, disappearing sense, more like a bang, you’re dead departure.

The sinister undercurrent starts with the student’s death at breakfast in the dining room of an elegant Slovakian hotel and gains momentum as another murder takes place within hours, this time at the city prosecutor’s office. The second murder is by far the most traumatic for the Commander, as her lover (actually, her would-have-been fiancé) is the victim of a telephone bomb.

The story is smoothly depicted in flawless English, somewhat reminiscent of Agatha Christie’s style in her Tuppence and Tommy mysteries. Genelin draws the reader into his scenes with highly cinematic descriptions of the Eastern European locales where the action takes place. The mystery might well be moonlighting as a sophisticated travelogue. The cafes and their menus reflect the foods and traditions that make each city unique. The Magician’s Accomplice is also reminiscent of the 1963 film Charade, starring Audrey Hepburn; however, Commander Matinova is no Audrey Hepburn. Her character aligns better with Cary Grant’s character, for she’s truly a capable spy/law enforcement officer.

There are no gimmicks, or sleight-of-hand tricks, just dogged pursuit, plenty of worn shoe leather, and characters that are generally not what they appear to be. The author obviously has first-hand knowledge of bureaucracy and law enforcement. Each agency depicted in the story contains a full complement of the personalities one would expect to encounter, along with their gossip and tight cliques.

Although the settings are a bit exotic, the calm resolve of the main character is welcome and familiar. This is not because the book is the third in a series; rather, Commander Matinova is the embodiment of today’s serious professional woman. Society has come to expect her to suppress her raw emotions in the aftermath of disaster and soldier on. She is able to carry on admirably as she embarks on an odyssey to placate her boss and secretly search for her lover’s killer. The commander’s unlikely companion is an elderly magician who insinuates himself into her travels and ultimately aids the hunt for the murderer.

The Magician’s Accomplice is a classic police drama and mystery complete with fine dedication to principles. It is a joy to read because author Genelin knows how to write, in the best sense of the word.