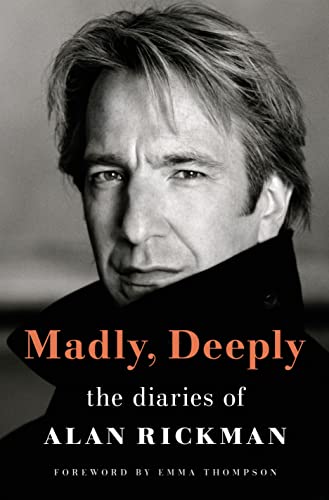 “Rickman’s diaries will provide young wanna-be actors what it’s really like to enter and exit the stage, play challenging roles and bask in the love of performance itself.”

This book was first published in the UK by Canongate. The American edition came soon afterward. Why it exists, when Alan Rickman is not as widely known an actor in the States as other British actors, is a testament to the camaraderie of the British theater world and the empathetic community of fellow actors and friends on both sides of the Atlantic.

In her Foreword Emma Thompson writes “I am still heartbroken that Alan is gone, but these diaries bring back so much of what I remember of him.” Alan Taylor, who edited Rickman’s diaries for publication, explains that Madly, Deeply is “a distillation of more than a million words.”

His wife, Rima Horton, a British politician and a lecturer in economics, recounts Rickman’s last Christmas, his last days and his funeral service, which was in the Actors’ Church in the heart of London’s theater district, where he was probably most at home, though he traveled widely and acted on two continents.

He first received attention for his role as Jamie, a cellist, in Truly, Madly, Deeply in 1991. Rickman called himself “a card-carrying member of the Labour Party.” He died in London in 2016 at the age of 69.

Many of the entries come across as fragmentary; others are gossipy and even cryptic. The best of them feel like snapshots that capture a time and place, such as England in 1964 when Harold Wilson, the Labour Party candidate, became Prime Minister and Rickman felt that there was “a real sense of revolution.”

To get the most out of this book it helps to know something about Rickman’s career, his role in Die Hard, Robin Hood, and the film version of Jane Austen’s Sense and Sensibility.

Madly, Deeply shows that he was always a professional, that for him the show always had to go on, and that he cared deeply, truly and perhaps even madly about friends like Emma Thompson, Helena Bonham Carter, and Ian McKellen, who suggested that Rickman “succumb to the laptop and thereby the email.”

Madly, Deeply reads like a series of emails and as a laptop kind of book that ought to be skimmed and grazed, with pauses for specific entries that catch one’s attention. There are many of them from beginning to end, and from 1993, just before he appeared as Captain Hook in An Awfully Big Adventure, until 2015, a year before his death.

The photos help provide a picture of Rickman, and the extensive index, which begins with Adele and Woody Allen and ends with Emily Zola and Catharine Zeta-Jones, makes it easy to locate the people who show up in the diaries, sometimes just once and sometimes over and over again. The index also reveals Rickman’s wide and divergent interests and his own conflicted personality.

“Half involved, half outside—impossible mix or original one?” he asks himself, and then leaps ahead, mentions a costume designer named Natasha Landau, the cancellation of a flight to Budapest, and a “great room overlooking the Danube.”

Rickman describes the perks of the profession and his own anguish on the set of a production, as he “sails blowsily into the fray.” The language can be memorable and the energy contagious, though one wishes for longer passages in which the author might dive deeply and madly into his own theatrical and cinematic self.

Rickman’s diaries will provide young wanna-be actors what it’s really like to enter and exit the stage, play challenging roles and bask in the love of performance itself.