Mad Like Tesla: Underdog Inventors and Their Relentless Pursuit of Clean Energy 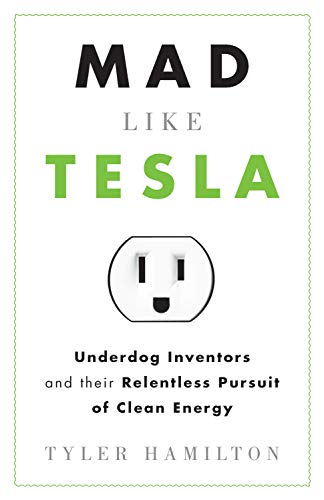 “Canadian science writer Tyler Hamilton has given the scientific community working on renewable energy solutions a public relations boost with his illuminating and important book, Mad Like Tesla: Underdog Inventors and Their Relentless Pursuit of Clean Energy.”

Science has not always been embraced in America. The outcome of the Scopes Monkey Trial denounced evolution, despite a venerable body of scientific evidence. And a surprising number of Americans in the 21st century remain skeptical about global warming and climate change. In spite of blistering summers, polar winters, tornados the size of Texas, and hurricane systems the size of Europe, there are enough skeptics to stall efforts by scientists in the race against time to save the environment.

Canadian science writer Tyler Hamilton has given the scientific community working on renewable energy solutions a public relations boost with his illuminating and important book, Mad Like Tesla: Underdog Inventors and Their Relentless Pursuit of Clean Energy.

Mr. Hamilton focuses on the ”lone runners,” as he calls them, inventors and scientists who, like the Serbian-American engineer Nikola Tesla (1856–1943), inventor of alternating current, are often considered obsessive lunatics or scam artists by the inevitable skeptics and naysayers. Yet they persist in their mostly private, usually underfunded quests to change the future.

In his compelling introduction, Hamilton skillfully lays out the eternal predicament of innovators throughout history. He quotes Raymond Damadian who built the first magnetic resonance imaging (MRI) scanner in 1977, in spite of critics who said it could never be done. “The bolder the initiative, the harsher the criticism.” Mr. Hamilton writes of case after case of famous “breakthrough” inventions, which were considered lost causes in their day and are now indispensable.

There are many barriers to scientific innovation and true progress, Hamilton writes. The biggest, perhaps, is what he calls “scientific groupthink,” the denouncing of any ideas that deviate from the laws of nature or the known body of scientific knowledge. Corporate interests impede innovation by managing the research. Hamilton quotes the inventor of the Segway scooter, Dean Kamen, who said, “Good management tries to eliminate surprise; therefore, good management eliminates innovation.”

Mr. Hamilton visits an inventor, scientists, and entrepreneurs working on machines, processes and technology which will save huge amounts of energy, streamline energy production, or create renewable clean energy processes. Michel Laberge, owner of Vancouver–based General Fusion, is working on cold fusion, a somewhat discredited area of research, and is confident of supplying cheap, renewable, and clean energy to the grid by 2020. Scientists at the tiny Solaren Corporation in Los Angeles are working on harnessing solar energy from outer space. A West Palm Beach company Hamilton visits is growing algae reservoirs for energy production.

In the closing chapter, Mr. Hamilton gives readers a clear-eyed look at the entrenched oil industrial and financial infrastructure and its reluctance to shift to new energy sources and delivery systems. He notes that China is now the world’s top manufacturer of both solar and wind technologies and the dominant force in an unprecedented industrial revolution, which will have to be embraced by North American business if it wishes to remain in the economic race.

For this reason, Mr. Hamilton is optimistic. He sees a movement “chiseling away at the foundation of our carbon-based economy,” which is generating a momentum determined to take on the energy industry giants and make them fall, making room for the risk takers and visionaries he obviously admires, the “unappreciated warriors on the front lines of necessary change.”