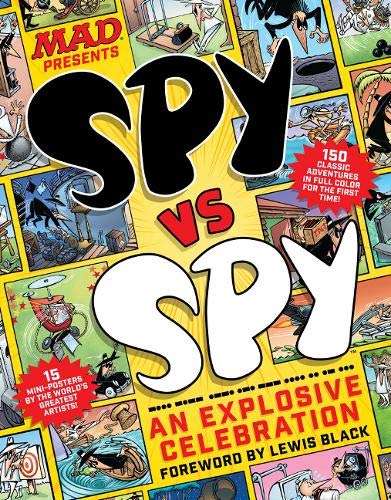 Filled with full color explosions of malevolent mayhem straight from the Cold War, Spy vs. Spy has never looked better! Paranoid, methodical, silent, dangerously deadly and completely crazy, The Black Spy and The White Spy have been circling each other with a bomb hidden behind their back since the one page strip Spy vs. Spy first appeared in MAD #60 (January 1961).

The classic black and white one page strips from MAD magazine have now come into the 21st century. MAD Spy vs. Spy: An Explosive Celebration by The Editors of MAD Magazine gathers the greatest strips from over 50 years of clandestine commotion.

In addition to coloring and reprinting well over 60 percent of the strips originally written and drawn by the character’s creator Antonio Prohias, the volume also features work from Peter Kuper, who took over the strip from Prohias in 1997.

As part of the celebration of Spy vs. Spy, the editors have also asked modern artists such as Jim Lee Peter Bagge, Evan Dorkin, Tony Millionaire, and others to create posters featuring the endless antagonistic action of The Black Spy and The White Spy.

Each one of the artists featured seems to be having the time of their life. Yuko Shimizu’s reimagining of the two spies as classic wallpaper is nothing short of gorgeous. Eisner Award winner Bill Sienkeiwicz (Daredevil, Elektra) sees the Gray Spy (the seldom seen female version of the boys as created by Prohias) as a beach babe while quietly holding a mousetrap open for the boys. Darwyn Cooke sees the boys huddled in a bed surrounded by snakes, bombs, darts, knives, beakers with poison . . .

Going back to the original art (or pages when needed), the editors at MAD have brought in Carrie Strachan to add color to the original black and white work of creator Antonio Prohias.

The results are stunning. Sometimes colorizing a previous existing art form can come close to ruining it. Or even worse, rob the original of its spirit, such as the attempt to colorize The Three Stooges shorts.

What Strachan has added to the original work of creator Antonio Prohias is amazing. She has written a three-page article describing the step-by-step process. Choosing the correct color for a work that originally appeared in black and white is a difficult task, one that can upset fans with even the slightest off-choice.

Every choice Strachan made enhances Prohias’ work. Not one ounce of the frantic energy that he brought to the strip has disappeared. Landscapes that once seemed bleak and isolationist now make us laugh for a new reason. Now that the crashes, clubs on the head, and socks on the jaw hurt even more!

The one page strip Spy vs. Spy has now been a big part of MAD magazine since the two little Cold War combatants first appeared in MAD #60 (January 1961).

Sergio Aragonés, the creator of Groo the Wonderer as well as the man behind those wild little drawing seen in the margins of MAD decade after decade, has written and drawn a four-page biography and appreciation of Prohias.

Long before he dreamed up the Spy vs. Spy, Prohias was already Cuba’s most notorious and famous political cartoonist. In 1960, seeing the writing on the wall with the rise of revolution, he felt that he needed to leave his beloved homeland. Three days before Castro came to power he made his way to America.

He took what jobs he could to support his family while working late into the night on his art. Months later he walked into the office of MAD with his daughter as well as the complete idea for Spy vs. Spy including examples and full pages.

That day he and his daughter walked out with a check for $800. The strip has been appearing in MAD ever since.

Prohias had created a rarity: a strip with a recurring premise that meant different things to different age groups. A young kid might see only the slapstick, the wildness, the explosions, and the pratfalls. His grandfather could see the philosophical embodiment of the world’s problems brought to life in two simple, pointy nosed men.

In the song Pure and Easy, Pete Townshend wrote: “There once was a note, pure and easy, Playin' so free, like a breath rippling by. The note is eternal. I hear it, it sees me. Forever we blend. And forever we die.” Spy vs. Spy is that note, trapped in time and in each strip, that at least one of them, if not both, are going to be dead. It is Henny Youngman screaming for you to take his wife while he’s on acid. It is Joseph Campbell trying to understand Ulysses. It is Jackie Gleason saying “Away we go!” The strip, for all its insane violence, is two atoms trying to escape a nucleus.

With a foreword by Lewis Black, MAD Spy vs. Spy: An Explosive Celebration is history, laughter, a Road Runner cartoon, and pure fun.