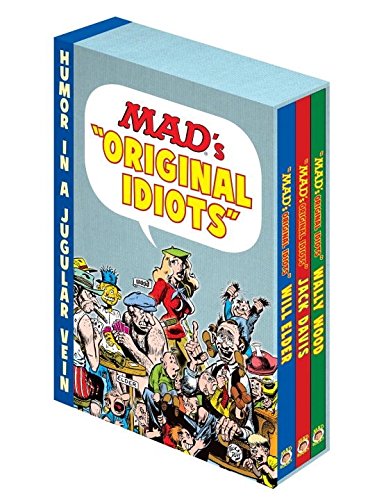 It wasn’t just the wild laughs, hilarious parodies, and complete lack of respect for almost anything it wrote about that pushed MAD into the spotlight. It was the stunning art that sealed the deal. You see, for the first 23 issues of the magazine’s history, MAD was actually a comic book! And for the most part, it was in full, glorious, cinematic, detail-packed color.
MAD’s Original Idiots is a three-volume celebration of the best art and stories from those first 23 issues. Each book in this special slip-cased edition focuses on an individual artist who helped shape the image, look and tone of MAD. (All three books are also available individually).

When MAD was first published in 1952, artists Wally Wood, Jack Davis, and Will Elder were already veterans of the comic business. Through their individual work in a multitude of comic book genres, from romance to science fiction, they were each considered to be among the best in the field.

No one had ever seen anything like MAD before. The comic book had the unmitigated nerve to parody comic books themselves! MAD’s founder, editor and writer for these first issues was Harvey Kurtzman. It was his genius to parody what readers of the day found familiar.

They went after newspaper strips, TV and radio shows, classic children’s literature, and the history learned in the modern schoolroom. The comic book even had the unmitigated nerve to parody comic books themselves.

Seldom have a group of artists been so perfectly matched with the writer they worked with. It didn’t matter if Kurtzman threw a movie parody, a newspaper comic strip or a classic of literature such as Poe’s The Raven at his artists, Wood, Elder, and Davis always picked up what he gave them and drove the material home. Or, sometimes, deliberately into the ground!

But it was the appearance of the Superman parody, Superduperman, in MAD #4 (April–May 1953) that blew MAD up in the public’s eye. After #4, MAD was a best seller on newsstands.

In his parody of Superman, Kurtzman wrote a piece that fully captured the idiotic posturing of his secret identity (Clark Bent . . .) as well as the inherent absurdity of his incredible powers. He closes the peace by bringing in Captain Marbles (and his catch-phrase “Shazoom”), as a hilarious sub-reference to the legal battle that DC had been waging for years against Captain Marvel.

Wood’s Superduperman (complete with a Good Housekeeping Seal instead of the familiar “S” gracing his chest) is a thing of beauty. His Clark Bent is a beefy shlub with a tiny head surrounded by flies. Lois Lane is a ball-busting force of nature who has no time for idiots. The piece is so close to the bone that National Periodicals, who owned Superman, threatened a lawsuit against EC, the publisher of MAD.

Wood takes on Earnest Lawrence Thayer’s poem Casey at the Bat in MAD #6 (August–September 1953). The poem ends with one of the town’s kids hoisting another on his shoulder as they intend to exact revenge on Casey for his dismal performance at the plate. There may be a gun involved. . . .

Following the poem to the word, Wood gives baseball and small town America their due. There are out-of-control wheelchairs, toupees, golf clubs, basketball players, football players and almost anything he could think in this classic of the baseball diamond.

At the time MAD first appeared newspaper comic strips were part of the daily vocabulary. All three were exceptional at mimicking an artist’s style. Elder is particularly inspired on Poopeye, Katchandhammer Kids, Manduck the Magician, and especially Gasoline Valley. As beautiful as his work was on these, nothing can ever top his Archie parody, Starchie from MAD #12 (June 1954)

Jack Davis drew Mark Trade (Mark Trail) for MAD #12 and then he took apart TV line by line with Captain TVideo! (MAD #15 September 1954). In MAD #18 (December 1954) he commits Alice to Wonderland in a way that Lew Carroll could have never imagined. There are times in the story when Davis’ work is nearly indistinguishable from artist John Tenniel’s original work on Alice.

Very few of the cultural icons of the early fifties escaped MAD’s gaze. Davis’ Hah! Noon! (MAD #9, March 1954) parodies the film High Noon. His art on the story almost seems to be a set up to his later career as one of the greatest movie poster artists of all time. There is something special in the way that Davis could capture the essence of an actor or celebrity with just a few lines.

One of the amazing things about this work is that you don’t need to be overly familiar with the source material that Kurtzman and the artists are parodying. What they came up with is so funny that much of it can stand on its own without a single touchstone of familiarity.

The cultural impact of what MAD did in these first 23 issues is phenomenal. Some of the people who read these stories went on to make movies, write National Lampoon and Saturday Night Live and do standup. The rest of us just read these stories and laugh until it hurts.

This volume is history, art, and fun all wrapped up by three of the best artists ever seen in the world of comics.