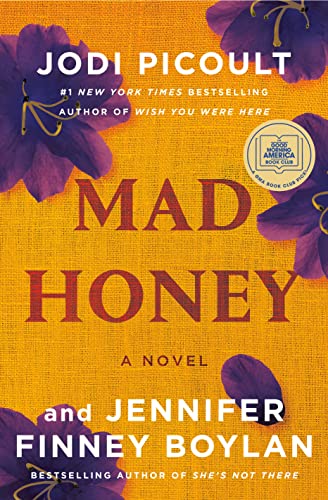 Starting over is difficult, but sometimes it is necessary. Olivia McFee learns this the hard way. She is thrilled when she meets Braden Fields, a resident in cardiac surgery at Johns Hopkins Hospital. She works at the National Zoo trying to earn enough to attain her graduate degree in zoology.

After a whirlwind relationship, and they move in together after only three months. Olivia considers him "the one," and they soon marry and relocate to Boston for his fellowship at Mass General.

A year after their marriage, Olivia's father dies of a heart attack. An apiarist, Olivia's dad had taught her everything about raising bees, and after his death, Olivia wonders how to carry on his business. Not only is her mother highly allergic, but she also has no idea about caring for them, so it is up to Olivia to take over this task.

When there is a death in the beekeeper family, the tradition is to "inform" the insects. If they aren't "asked" to stay with their new master, they leave. Olivia and her mom drape each colony with black crepe and communicate that their keeper is deceased. They accept this turn of events and remain in their colonies and for five years, Olivia commutes from Boston to her childhood home in Adams, New Hampshire, to attend to them. Then after she gives birth to her son Asher, she takes him with her. He stays with her mother while she checks on the hives, finding she loves her new "job."

As time passes, Braden becomes overly possessive and abusive. She wears turtleneck tops with long sleeves to cover the many bruises Braden inflicts on her hoping others, especially Asher, will not see her injuries. When Braden strikes out at Asher, Olivia realizes it's time to leave, so she packs up and goes to Adams with Asher. With Asher only seven, Olivia does not want him to have any contact with his volatile father.

The years pass, and Olivia loves being back in her hometown. When her mother passes on with Olivia taking ownership of the farm, she tends to the bees, while producing honey and other items for income. Asher, happy in his new environment, is a star player on the school hockey team and is in love with Lily Campanello.

Lily, a recent transplant with her single mom Ava, has moved to town after living on the west coast. Asher and Lily become an item quickly, and Olivia also finds the very intelligent young woman to be special. She is happy to see her son content as he is on his way to becoming a man. As the two teens get closer, Lily has a secret she is afraid to share though she trusts him. Their friendship becomes intimate, and they state their love for each other, but she still wonders if she can confide in him. She remembers when she confided her "secret" to her best friend in California, the friend disclosed it to the whole school. What kind of person does that?

Lily knows she loves Asher, so she takes the chance to disclose she’s transgender. She was born a boy, but never felt like a male since childhood. He was the constant torment of his peers, and though his mom supports his feelings, his father is livid. This causes animosity between Ava and Lily’s dad, so they leave Seattle where they had been living to move to California. While there, they meet with a doctor who performed a sex change on her.

Uncertain, Lily fears Asher's judgment, and they have an argument. She pushes him away without talking, but he loves her and needs to know what is wrong.

Then, one day Asher calls Olivia saying, "I think Lily is dead!" The next thing she hears he is at the police station. When she arrives, she is met by Lieutenant Newcomb, the sole detective in their small town—and the guy she remembers as "Mike" and attended the junior prom with when they were in high school.

Olivia speaks up, "'Asher—’
"'—is fine,' Mike interrupts. He holds the door to the interior of the station open so that I can walk through. 'But he's pretty worked up.'
"'He said that Lily was . . . ' I can't even shape my mouth around the word.
"'She was taken to the hospital. I haven't heard anything else, yet. I'm hoping Asher might help us figure out what happened.'
"'Was he there?'
"'He was found holding her body.'
"Body."

Lily had been home from school sick, and Asher went to her house to discuss their recent disagreement, and when he arrives, he finds Lily sprawled at the bottom of the stairs unresponsive. Shaken, Asher takes her to the living room sofa where he tries to revive her. Now the police are questioning . . . did Asher kill her in a moment of rage?

Olivia is shocked. Could Asher have done something like this? Did he inherit Braden's genes and is abusive like her ex-husband had been with her? She cannot accept this, yet, when Asher is arrested and placed in a cell, her mind whirls. Her immediate thought is to contact Jordan, her older brother, a powerful attorney. If anyone can help Asher, he can.

Though Asher vehemently claims he is innocent, everything points to his guilt for harming the girl he loves. Incarcerating him is unacceptable to Olivia, but the amount of bond the judge posts is impossible for her to raise. A simple beekeeper, she is land rich but cash poor, and she refuses to go to Braden for the money, though he could easily afford it. If this goes on, will she have to resort to seeing him after all these years?

The big question is did Asher actually harm Lily or was someone else responsible? A lengthy trial ensues with Jordan as his defense attorney, and soon both Asher and Olivia become pariahs in their small town, sympathizing with Ava as she suffers the death of her daughter.

During the court case, the subject of Lily’s transformation is brought to light. Dr. Powers, the physician doctor who performed this operation is called to testify and this is what she discloses:

“She looks at the jury. ‘This example is a really great way to understand what it means to be transgender. Everyone has a dominant gender identity. It’s not a preference, it’s not something you can change just because you feel like it—it’s just how you’re wired. Most people who are assigned male or female at birth feel their gender identity matches that label—they’re called cicgender. But transgender people know that being in the body they are in feels not quite right. Some know this when they’re very young. Some spend years feeling uncomfortable without really knowing why. Some avoid talking about gender identity because they’re ashamed or afraid.  . . .’

‘. . . When trans people tell the truth about who they are, they face stigma, discrimination, harassment, and in some cased, violence,’ Dr. Powers says bluntly. ‘Trans people have been fired for expressing their gender identity. They’ve been beaten up or thrown out of their homes. Last year, nearly thirty trans people were murdered This year, so far, another four have been killed.’”

“‘Transitioning is the period during which a trans person starts to live according to their gender identity, rather than the gender they were incorrectly assigned at birth. It’s important to point out that you can be transgender and never transition. It’s not a one-size-fits-all, and gender expression looks different for every person. For one, it may mean certain clothing or growing your hair long, or putting on makeup. For someone else, it could be changing your name or the pronouns you use to refer to yourself. Some people change their driver’s license or passport to reflect their correct gender. Others undergo hormone therapy, or a surgical procedure, so that their bodies reflect their correct gender.’”

As she goes on to relay Lily’s experience, she explains the surgery she underwent to attain her true gender, the prosecutor and the spectators in the courtroom use this information to believe that Lily did report her true identity to Asher, which angered him to the point that he caused her death rather than to have others find out and torment him.

Mad Honey is a multi-faceted novel focusing on many issues. With an in-depth description of the responsibilities of beekeepers to the intricacies of the judicial system, to the secrets and the angst of young people dealing with their sexuality, this tale proves to be both informative and interesting as well as heartbreaking.