Mad As Hell: How the Tea Party Movement Is Fundamentally Remaking Our Two-Party System 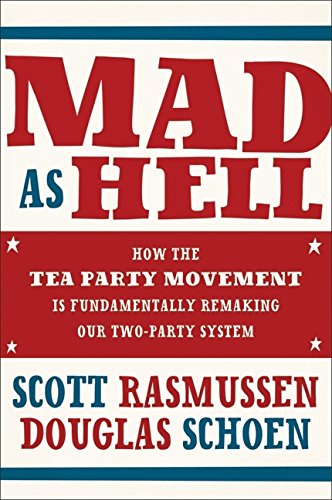 Scott Rasmussen and Douglas Schoen obviously hurried to get Mad as Hell on the market before the November midterm elections. They should have waited.

The problem isn’t so much that the election results could completely disprove, or at any rate add more context to, their subtitle. After all, there can be value in books that are published before an election (or any other major event), if they help readers analyze what’s at stake and decide how to vote. And naturally, as professional pollsters, Rasmussen (founder of the independent Rasmussen Reports) and Schoen (a co-founder of Penn and Schoen, usually identified with liberal clients) want to be out in front, to look as though they had their fingers on the pulse of the electorate ahead of anyone else. Fair enough.

No, the real problem is that the authors didn’t have—or choose to spend—enough time for thorough research and editing. Thus, the book is more padded than an old-fashioned bustle.

The repetition and fluff are evident on nearly every page, with giveaway phrases like “as we noted above” and “as we’ve pointed out earlier.” To illustrate the revolving door connecting the highest levels of government, Wall Street, academia, lobbying, and business, there are long biographies, not just of one or two or three, but five door-turners. Apparently, it’s so significant that the president of the Service Employees International Union was the most frequent visitor at the White House during President Obama’s first six months in office, that Rasmussen and Schoen must repeat this twice within five pages, then again later. The entire Chapter Nine, “The Media,” is nothing but padding. (Wow, did you know that the Internet and social media have become more influential than traditional newspapers?)

And if the authors run out of their own words, no problem; simply fill in with long quotations from the New York Times Op-Ed pages (David Brooks and Frank Rich are particular favorites), The Atlantic, the American Thinker, and other publications.

I could go on, but that might be padding this review.

What makes the puffery even worse is that so many of the repeated-ad-nauseum points are hardly earth-shattering. Americans have lost faith in their major institutions. We are in an unprecedented “cross-systemic, broad-based breakdown of our economic, political, and social systems.” (Also “a convergence of economic, political, and social forces.”) Both liberals and conservatives are furious at the bailouts of big banks. President Obama was elected as a centrist, but the country has fissured since then. The elite media ignored the Tea Party for too long.

Moreover, the authors never analyze what the Tea Partiers are actually saying. By simply repeating these activists’ opinions (over and over), Rasmussen and Schoen let them stand unchallenged, as though they were unarguably true. If the Tea Party worldview will be a significant force in American politics for years to come, as the book claims, the authors owe their readers a deeper understanding of that viewpoint.

Mad as Hell does offer some interesting nuggets of information, and if it’s correct, Democratic politicians ignore these nuggets at their peril. The authors present some compelling data from their own polling and insights from interviews with citizen-activists to buttress their assertion that the Tea Party encompasses a broad swath of the country, not just the Republican fringe. For instance, 55 percent of the people that the pair surveyed last February—and 30 percent of Obama voters—had a favorable opinion of the Tea Party (a chart the book depicts at least twice).

But the meat of these 300 pages could easily have fit into five—say, an article in The New York Times Magazine. And such an article could have been written a lot closer to Election Day, allowing more time to see how the Tea Party’s clout grew or waned—but still in enough time to influence the voters.