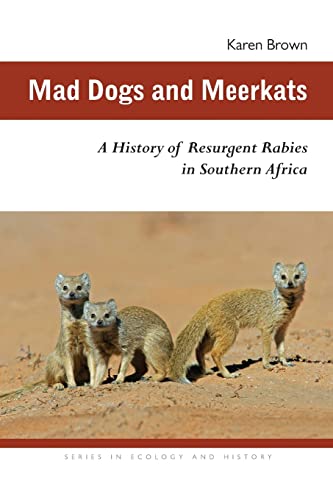 Mad Dogs and Meerkats reveals how human rabies in South Africa has historically resulted from poverty, ignorance, political incompetence, and neglect over the generations.

The manner in which the disease spread throughout South Africa during the 19th and 20th centuries due to evolving human activities and environmental changes is also shown.

Dr. Karen Brown discusses how the apartheid regime in South Africa led to the splitting up of South Africa into both rural and urban communities that were exposed to disease facilitated by the presence of poverty in those areas primarily reserved for black people.

What is so remarkable as a result of such short-sightedness by past policy makers is not that such fragmentation of the population hampered efforts to control the spread of disease in the historically under-resourced areas, but that, despite the modern-day availability of vaccines and presence of initiatives to protect human lives by controlling the disease in the dog and wildlife population, rabies is currently on the increase in South Africa, being both emergent and resurgent.

Dr. Brown uses her uncovering of the interesting and unusual epidemiology of rabies to explore elements of South Africa’s environmental, medical, and social history that have bearing on the disease. In contextualizing the history of rabies in South Africa, she elaborates on six main themes that collectively explore human-animal relationships and the impact that rabies has had on developments in science and on public health policies. No matter whether one’s chief interest lies in the human or animal component of her tale, Dr. Brown gives much food for thought in her revelation of human-animal interactions and how infections pass between animals and people. Her focus on the colonial mindset and on the evolution of Western knowledge about rabies should prove to be of much interest to those focused on issues of ethnographic concern.

For conservationists and agriculturalists, Dr. Brown’s overview of how South Africans’ perceptions of wildlife have been influenced by the presence of rabies within their borders is likely to encourage much discussion of the subject. The author’s insights into the political ramifications of rabies in terms of policy making and socioeconomic development has much relevance for those involved in dealings with South Africa, as well as for those living on the African continent itself.

Despite Dr. Brown’s focus primarily on the occurrence of rabies in Southern Africa, her arguments are far broader, encompassing such arguments as those of Dr. William Hillary and Dr. Benjamin Moseley, who described the situation regarding canine madness in the West Indies during the latter half of the 18th century.

In addition to the lively and informed nature of Dr. Brown’s writing, Mad Dogs and Meerkats is also readily accessible to the layperson. Dr. Brown includes many quotations from writers and experts in the field, always ensuring that such quotations are pertinent and salient, while restricting them to the most relevant utterances made by these professionals. By making use of endnotes, she prevents her sourcing of material from interfering with the smooth flow of the text, so that Mad Dogs and Meerkats: A History of Resurgent Rabies in Southern Africa makes for both an informed and enjoyable read.

Dr. Brown’s overview of the re-emergence of rabies in Southern Africa benefits from her clear command of the English language, which allows her to present a comprehensive, yet relatively concise, picture of the field. Her evident interest in, and insight into, both the human and animal components of her subject provides her work with wide-ranging appeal to individuals from a wide range of backgrounds, including veterinary, agricultural and ethnographic. The editing of Mad Dogs and Meerkats is well-nigh flawless, contributing significantly to the trustworthiness of the text.

Dr. Brown rounds off her work with a detailed bibliography and meticulously compiled index. In short, the work should prove to be invaluable for both professional and layperson alike, and merits inclusion in general library collections, as well as in those aimed at the scientific community at large.