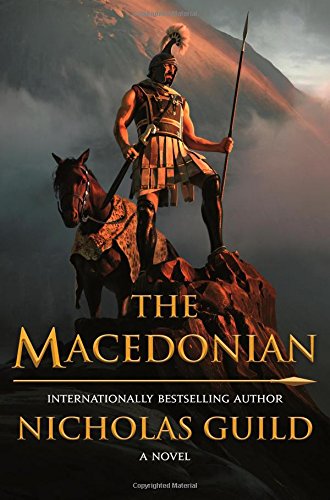 “the story of a man whose military prowess enabled him to become the king he had no wish to be . . . ”

The birth of Philip, son of King Amyntas of Macedon, descendant of Herakles, is barely acknowledged. When told neither his wife nor child may survive, Amynas merely tells his guests: “‘Go on with your feasting. It is a slight matter that calls me away, merely one of the inconveniences of domestic life.’”

Hated by his mother merely because he exists, ignored by his father as the least of his heirs, Philip grows up overshadowed by five older brothers, expecting nothing more out of life than to be a loyal subject and to fight under his eldest brother’s command, but life has other plans. He is raised in the home of his father’s steward and will always be more comfortable in plebian circumstances than in royal ones. For reasons never fully explained, he is also feared.

It was said it is a family tradition for royal Macedonians to kill each other.

After Amyntas’ death, this custom is brought home with a vengeance. In short order, elder brother Alexandros is killed by Ptolemy, Philip’s brother-in-law who is also his mother’s lover. Ptolemy is appointed regent because the heir, Perdikkas, is a minor, and rids himself of the other heirs by declaring them traitors.

Philip warns Perdikkas against his regent. “‘The Lord Ptolemy has found it within himself to murder a king. If you do not pull yourself straight and act the man, he may imagine he is at liberty to murder another.’”

Sent as a hostage to the Dardanians, ruled by his own great-grandfather, Philip foils an assassination attempt by Ptolemy who then sends the boy to Thebes, where the rulers accept the youngster not as a captive of war but as an equal. With the knowledge they may be tutoring a future opponent, they teach Philip the art of war Greek-style. When he is released from Thebes, he returns to Macedon to slay the man who killed his brother.

Now Perdikkas rules alone, and Philip proves his loyalty by overcoming a rebellion, commanding half the men as the opposing army. In gratitude, Perdikkas makes Philip king of the conquered people.

Distrust is also part of a royal Macedoanian’s life.

Though Philip does nothing to threaten his brother, Perdikkas believes he wants more than a mere title among a barbarian tribe. Once again, the youngest son is at war with his elder brother, reluctantly but victoriously.

Philip’s life is summarized by his uncle Menelaos: “You have developed into something of a military wizard, Philip. You inherited a broken, demoralized army and a country hedged about by enemies and a year later, you have won two major battles and are reckoned dangerous enough that the Athenians have signed a treaty of peace with you.”

For four generations the master of Lynkos had made war and peace as absolute sovereigns, treating the kings of Lower Macedonia as equals. Now that was to end, at a word from a boy Menelaos had once caught poaching his boar.”

Meanwhile, another brother bides his time, waiting to attack. . . .

Historically, Philip of Macedon is a largely unknown character. Most people know him as nothing other than “the father of Alexander the Great.” He’s generally depicted as the ageing, half-lame drunkard assassinated by his son’s followers while at a feast. True, Philip’s son conquered the then-known world, but the fact remains and is largely ignored that Philip was there before Alexander, blazing the trail through that world his son would master.

Author Guild has embued Philip with knowledge greater than a boy of his years should have. His conversations are filled with aphorisms as well as warnings, but those with whom he speaks are generally too self-absorbed or vacillating to heed. Perhaps it is a writer’s device, but he’s also remarkably lucky in surviving the attempts on his life.

Unlike most biographies, actual or fictional, this story doesn’t follow Philip from birth to death but stops at his greatest triumph—before old age sets in, before Alexander—the point at which his star shines brightest in the constellation of Herakles.

Filled with a colorful panorama of Greek life and customs, this is the story of a man whose military prowess enabled him to become the king he had no wish to be, the man who preceded Alexander on the throne of Macedonia and brought that kingdom from a mere barbarian country to the north into the conqueror of the world.