Ma, He Sold Me for a Few Cigarettes: A Memoir of Dublin in the 1950s (Memoirs of Dublin) 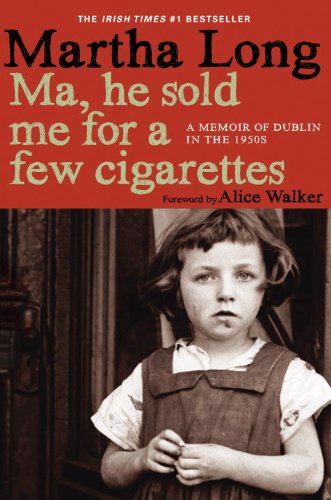 “. . . a difficult, painful, and at times almost unbearable read. Yet this memoir should be widely read and discussed . . .”

Martha Long’s Ma, He Sold Me for a Few Cigarettes is the first in her series of five memoirs and covers her life from age 4 through age 11 in 1950s Dublin, Ireland.

This harrowing memoir chronicles the horrific and systemic sexual and physical abuses Martha Long suffered, ordeals largely perpetrated by her stepfather, Jackser—a cruel and vicious alcoholic enabled by Martha’s mother and by a church and society that for the most part looked the other way.

We were on our way back up Summerhill when suddenly I got an awful blow tha sent me flyin out onta the road an nearly under a car. I didn’t know wha hit me until Jackser picked me up by me neck an kicked me back onta the footpath. I didn’t get time te get me wind back before he had me offa the ground again an was shakin me. ‘I told ye! I told ye!’ he said as he boxed me. ‘Not te leave the child alone. Ye were told te mind the pram.’ I was convulsin up an down, me whole body was shakin, an great sobs were comin outa me. Loads a people were aroun, but nobody bothered te interfere. He kicked me again, sendin me flyin te the ground, an roared, ‘Get up!’ Get movin, cos I’m goin te kick ye all the way back te tha pram.’

Ms. Long’s memoir is particularly admirable for the great compassion and perspective it demonstrates. The author devotes much space in the work to fully fleshing out Jackser and her mother, sympathetically showing them to be terribly flawed, co-dependent, and very human, themselves both victims of inconceivable abuses.

Ma, He Sold Me for a Few Cigarettes also goes beyond seeking sympathy for its author and forcing the reader to witness catastrophic misery and trauma, instead memorializing the amazing spirit of a little girl and ultimately the human spirit.

Overall, the book would have benefitted from more stringent editing. The consistent use of working class Dublin colloquialism versus using the dialect only in dialogue might grate and runs the risk of making the work less accessible. There’s also repetition and redundancy throughout, and haters of the exclamation point will feel perturbed by its overuse.

That said, the fierce heart of this work and its writer beats out any issues around craft.

From close to the memoir’s end:

It’s dawnin on me, I’ve been robbed! I was believing I had a mammy. An Jackser was a man, an they were in charge. But they’re nothing. I’ve een rearin me fuckin self. An now they’re goin home, an I’m goin te be locked up! Well tha’s it! I’m finished wit them. And when I’m sixteen, I’ll make me own way in the world, an I won’t ask anyone fer anything. An no one will ever tell me wha te do. I’ll take orders from no one. An it would be a very brave man tha would lay a hand on me, cos he’s goin te fuckin lose it. I’m no Sally! [Martha Long’s mother]

Ma, He Sold Me for a Few Cigarettes is a difficult, painful, and at times almost unbearable read. Yet this memoir should be widely read and discussed at length so that we may discover the worst and the best of ourselves. So that we may be called to action and play whatever part we can in ending these inconceivable but very real crimes against children and humanity everywhere.

At almost 500 pages, this devastating memoir propels readers to the end by implicitly posing one burning question: How did Martha Long survive such unimaginable betrayal, injury, and suffering?

The answer is like the fuse burning up and the dynamite going off: Despite the agony, survivors know at the deepest level within their souls that they were born to live out better destinies.