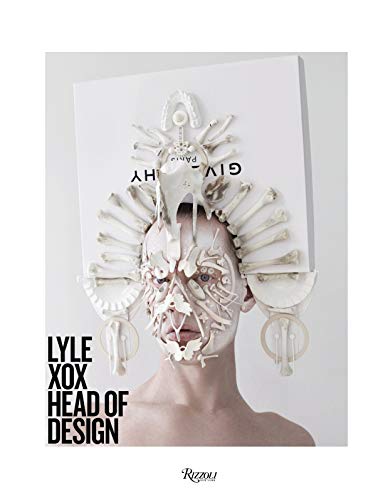 After reading an extremely brief introduction and a very informative single page foreword this book became a visual feast for the imagination.

It’s safe to say that few will recognize the name, but, oh, the treasures that unfold are of another world. As stated in Lyle XOX: Head of Design, “the head is the sculpture or canvas that sits upon its base” . . . the body. Whereas Daniel Lismore uses his entire body to tell a story with his head to toe fashion statements, Lyle Reimer uses his head to invent, construct, and create fantastical visual masterpieces from found objects.

Lyle XOX: Head of Design is a photo album of over 100 “looks” or sculptures created by this artist, which are accompanied by a short paragraph or two giving you some context; they are essential to explaining what you’re looking at—and what you see is astounding and wildly creative in every way. It is peak creativity using one’s face as a canvas while the “paints” become anything from a Brillo box to an empty intravenous bag from the hospital to a scrap of fabric. It’s so out of the ordinary that you are drawn to read the words that accompany the image, and you then must reexamine that image to truly understand what each image relates.

Without question some readers will find it perversely creative as it distorts the human face and becomes a basis for a collage of sorts; others will find the book infinitely intriguing and endlessly creative. This reader fell into the latter category because of the artist’s eccentric imagination and the stories that he tells both visually and in words. If you view Daniel Lismore as a sort of kinetic piece of art then you can categorize Lyle Reimer’s work as sculpture or static.

The takeaway is simple. This is not the usual fashion fare we are accustomed to in any way shape or form. If you need a frame of reference for further comparison then imagine that where Phillip Treacy and Stephen Jones focus and adorn what’s atop one’s head, then it is Lyle Reimer who focuses on the entire head as his finished work of art.